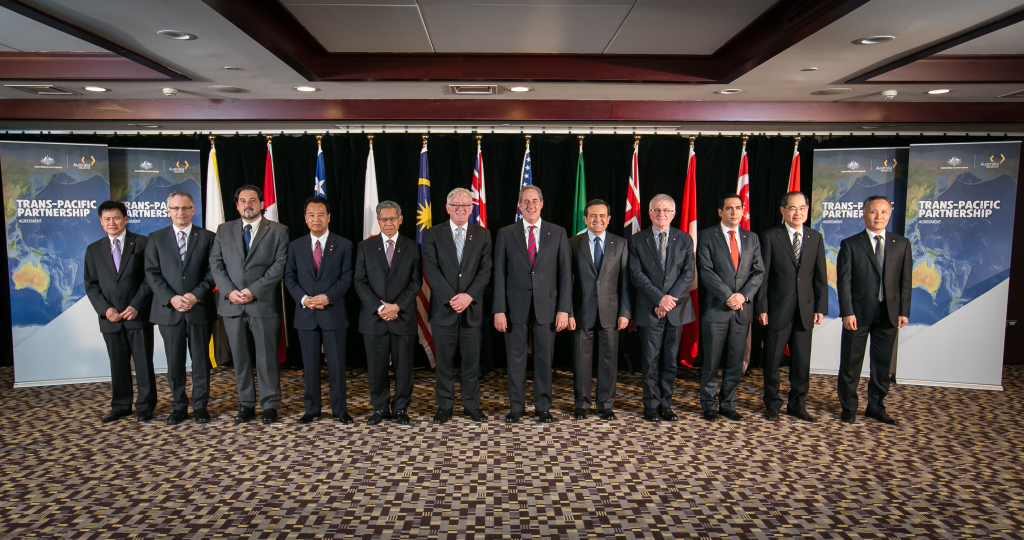 What is Trans-Pacific Partnership (TPP)?

TPP is a free trade agreement that was negotiated between The United States, Australia, Brunei Darussalam, Canada, Chile, Japan, Malaysia, Mexico, New Zealand, Peru, Singapore, and Vietnam. In a nutshell, the agreement aims at promoting jobs and growth in the Asia Pacific region by opening up markets, setting high standard trade rules, and addressing 21st century trade rules in the global economy.[1] The deal was concluded on 6 October, 2015 in Atlanta, USA by trade ministers of the respective countries.[2]

What is its significance in the World Economy?

The significance of this agreement can be seen in the fact that the combined GDP of the 12 trade pact countries is $28.5 trillion and they collectively produce 40% of the World’s economic output. The deal covers 4 continents and a population of 800 million. It must be mentioned that its ratification would create the largest trade zone in the World. [3]

Source: Snider, Michael (2015), “Is the TPP a fair, balanced deal for Canada”, The Globe and Mail, October 6; URL: http://www.theglobeandmail.com/report-on-business/international-business/what-is-tpp-understanding-the-new-pacific-tradedeal/article26648948/

What were the major areas of disagreement during the course of negotiations? How were these disagreements resolved?

One of the major areas of disagreement between negotiating countries was regarding the minimum period of protection of rights to data used to make biological drugs, by companies including Pfizer Inc., Roche Group’s Genentech and Japan’s Takeda Pharmaceutical Co.[5] The arguments by the countries stood as follows: While the United States was in favor of 12 years of protection to encourage pharmaceutical companies to invest in expensive biological treatments, countries such as Australia and New Zealand argued for the opposite. They were calling for a period of five years to bring down drug costs and the burden on state subsidized medical programs. The impasse was resolved by agreeing upon protecting data between five and eight years.[6]

What does the TPP mean for the United States?

The agreement holds a lot of significance for the United States. To enlist some of the benefits that shall accrue to the US economy; agricultural markets in Japan and Canada are opened up for its products while strengthened Intellectual Property Rules would benefit drug and technology companies. More importantly, the pact has given shape to a tight knit economic bloc that may challenge China’s influence in the region.[7]

What are the various views within the US regarding the TPP?

First of all, it is important to mention that President Obama was given the power to fast track negotiations with 11 other countries, party to the TPP; by a legislation passed by the Republican controlled Senate in June 2015.[8] President Obama has welcomed the TPP agreement and stated: “This partnership levels the playing field for our farmers, ranchers, and manufacturers by eliminating more than 18,000 taxes that various countries put on our products. It includes the strongest commitments on labor and the environment of any trade agreement in history, and those commitments are enforceable, unlike in past agreements. It promotes a free and open Internet. It strengthens our strategic relationships with our partners and allies in a region that will be vital to the 21st century……[9]”

The reaction to TPP within United States has been mixed, with some disappointed while others satisfied with the deal.

Hillary Clinton expressed dissatisfaction at the Trans Pacific Partnership for the favor accorded to Pharmaceutical companies and also because there is no provision to ensure that countries do not gain trade advantage by manipulating currencies.[10]

Senator Bernie Sanders was disappointed by the deal that would cost American jobs. Donald Trump, the billionaire businessman and GOP presidential frontrunner was of the opinion that TPP is a terrible deal. While Lincoln Chafee, a Republican-cum-Democrat who has served as both a US senator and governor for Rhode Island, found favor with the deal. There are also those who haven’t taken on either side. Former HP CEO Carly Fiorina, supports the idea of US strengthening partnerships in Asia Pacific region but disagrees with the provision that allows China to enter the pact at a later point.[11]

What does the TPP mean for India?

The opinions about TPP in India can be called mixed. As per a study by The Peterson Institute for International Economics (PIIE); India’s annual export losses could be approximately $50 billion in a situation where China and the rest of Asia Pacific Economic Cooperation forum were to join a second stage of TPP; without India. On the other hand, a professor at IIFT quoted a study by the East Centre; that trade diversion on account of India not joining TPP would be less than $ 4-5 billion over 10 years.[12]

What does the TPP mean for China?

As per economic modelling by Petri and Plummer, China’s income losses from TPP would be over 46 billion dollars by 2025. On the other hand, if China joins the TPP along with South Korea, Indonesia, Philippines and Thailand, it could witness income gains of over 800 billion dollars by 2025.[13] However, there is a word of caution here. The nature of TPP pact is such that wouldn’t be acceptable to a country like China. It is difficult for China to conceive progressive institutions and allow labor unions that TPP members are obliged to adhere to. It has been argued that TPP’s design has been made in a way to include free or freer countries than China.[14]

Professor Masazumi Wakatabe from Waseda University supported the TPP  as it fits into his definition of an ideal economic society. On being questioned about the absence of China’s involvement in TPP, he clarified that the pact does not seek to keep China out but is an inducement device for China.[15]

What has been the major criticism of TPP?

The biggest criticism of the TPP agreement has been its secretive nature that was conspicuous in its secret negotiations. Other points on which it received criticism include the consequential intensification of competition between countries labor forces, and empowerment of companies to sue governments for changing policies (on health, education etc.) towards state sponsored services.[16]

Arunima Wanchoo is a Research Intern at ICRIER, New Delhi. The views expressed are personal.

[3] Snider, Michael(2015), “ Is the TPP a fair, balanced deal for Canada”, The Globe and Mail, October 6; URL: http://www.theglobeandmail.com/report-on-business/international-business/what-is-tpp-understanding-the-new-pacific-tradedeal/article26648948/

[9] “Statement by the President on the Trans-Pacific Partnership,” White House, October 05, 2015, available at https://www.whitehouse.gov/the-press-office/2015/10/05/statement-president-trans-pacific-partnership

[15] Professor Masazumi Wakatabe at Waseda University delivered a presentation at a Panel Discussion on Regionalism in Asia-Pacific at Indian Council for Research on International Economic Relations, New Delhi on 8 October, 2015