Regional Security in Southeast Asia: Prospects and Challenges for ASEAN

The following article is based on a speech given by Dr. Sampa Kundu at the Young Scholars’ Forum on January 13, 2017.

Abstract: This commentary seeks to explain ASEAN’s approach to managing traditional security issues, with a focus on South China Sea disputes. It also briefly discusses the security challenges faced by it as the regional grouping is trying to prevent the region from becoming a hot spot of great power rivalries and evolve as a dynamic community.

ASEAN’s former Secretary-General, Surin Pitsuwan, has recently observed, “ASEAN has emerged as the fulcrum of geopolitical stability in Asia.”[1] Figure 1 suggests the wider ASEAN family which were designed to maintain the centrality of ASEAN in the East Asian (and to some extent, Asia-Pacific) regional security architecture. Over the last five decades, the Association of Southeast Asian Nations, established in 1967, has witnessed few successes and several failures. However, it is perhaps the most successful regional organisation involving the developing countries. Intra-regional trade share within ASEAN stands at approximately 23% as of 2015; officially ASEAN is an economically integrated community since December 2015 and very slowly heading towards transforming itself into a cohesive ASEAN community by encompassing political-security and socio-cultural dimensions.[2] However, arguably, ASEAN has not been able to achieve what is expected from it, and one question appears strongly in minds, and that is, whether ASEAN has any potential to play a fundamental role in ensuring regional security in Southeast Asia. 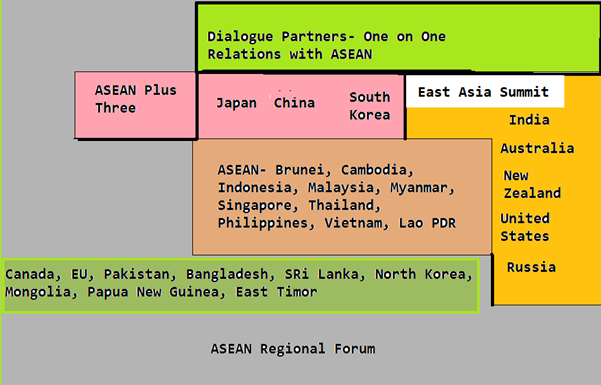 The region of Southeast Asia witnessed a number of major conflicts during the Cold War era. The Cold War divided the region into two ideological segments – one of them embraced the idea of communism and the other one incorporated westernised influences and thoughts. The formation of ASEAN itself was criticised by many as an instrument of the US and its allies to prevent the spreading of communism in the region. The founding document of ASEAN, The Bangkok Declaration (1967), however, spoke about creating a united region to fight back external interventions. Safeguarding the region from superpower competition and ensuring stability in the region were some of the other objectives of ASEAN to enable the members to concentrate on economic development.

For the first three decades, ASEAN remained as a little-discussed and under-performing forum. The end of the Cold War, however, brought several changes within ASEAN, and the regional grouping engaged itself in developing many other institutions in the region while preserving the idea of ASEAN centrality. The idea of the centrality of ASEAN should be understood in the light of the Cold War and post-Cold War era politics. In simple words, the US-led so-called San Francisco system guided the East Asian regional security during the Cold War era. The San Francisco system was shaped by bilateral treaties between the US and its allies in the region, and its aim was to ensure security through maintaining US military presence. This hub and spokes system got the US its closest allies in Southeast Asia, namely Thailand and Philippines. However, after the end of the Cold War, US’s failure in maintaining multilateral relations with the region made the ASEAN countries realise the importance of centrality of ASEAN so that region-specific problems can be handled through the regional powers. [4]

ASEAN Regional Forum (ARF-1994), Asia Europe Meeting (ASEM-1996), ASEAN Plus Three (APT-2003), East Asia Summit (EAS-2005), ASEAN Defence Ministers’ meeting (ADMM-2006) and ASEAN Defence Ministers Meeting Plus (ADMM Plus 2010) were formed with the primary objective of maintaining sovereignty and territorial integrity of the member states and sustaining peace and stability in the region. In all these forums, ASEAN plays a pivotal role, at least theoretically.

At the core of these developments was ASEAN’s interest to face a new challenge emanating from the post- Cold War political scenario and that was the emergence of an assertive China (which is militarily and economically much more superior than all ten Southeast Asian countries together) in the immediate neighbourhood. ASEAN’s China dilemma stems from the facts that China has successfully applied ‘divide and rule’ policy on the grouping’s members and with a few exceptions,[5] hardly any ASEAN country finds itself in a position to raise its voice against China’s assertive behaviour in the South China Sea. Southeast Asia’s economic dependency on China can be attributed as a major factor behind the region’s compliance with the Chinese interests. While ASEAN is well aware of its relative weakness against China, it has adopted an engaging and accommodating approach towards the giant neighbour so that escalation of tensions is avoided and the possibility of warfare is prevented. This strategy includes involving China with the regional institutions in a robust way. China’s accession to the Treaty of Amity and Cooperation in Southeast Asia (TAC), ARF, ADMM Plus, EAS and the Declaration of Code of Conduct on Southeast Asia by China and Southeast Asia (DOC- 2002) and efforts towards implementation of a Code of Conduct (CoC) on the same are few examples of ASEAN’s multi-pronged approach to engage China in the region’s security architecture in a significant way to avoid direct confrontations. The guiding principles of all these institutions and the key documents charting those agreements directly or indirectly refer to the ASEAN Way, based on the principles of non-interference in the internal affairs of each other, respect for sovereignty and territorial integrity and reliance on mutual responsibility and shared concerns to resolve any dispute in a peaceful way.

The latest addition to ASEAN’s effort to the regional security is its commitment to transform itself as a security community, a vision that was adopted in 2003 in Bali. Bali Concord II charts out the guideline of the ASEAN Political and Security Community (APSC) which has three key characteristics – first is to establish a “rule-based community of shared values and norms”; second is to work towards a “cohesive, peaceful, stable and resilient region with shared responsibility for comprehensive security” and third, to create a “dynamic and outward-looking region in an increasingly integrated and interdependent world”.[6] Preventive diplomacy and confidence building measures are two important pillars of ASEAN’s idea of comprehensive security, as articulated in the APSC blueprint. ASEAN Security Dialogue, ASEAN Defence Ministers’ Dialogue, ARF, ADMM, ADMM Plus are some of the measures taken towards that direction.

With the changes in the security architecture in the wider Asia-Pacific region, the tests of ASEAN as a regional grouping seem to be endless.

To borrow it from Jörg Friedrichs (2012) the means of handling the traditional security issues facing Southeast Asia can be divided into four sub-groups, namely, interstate trust, peaceful change, regime stability and conflict resolution.[10] Friedrichs (2012) further argues that ASEAN’s achievements are more visible in building inter-state trust and peaceful change rather than in actual conflict resolution and regime stability. This, in brief, describes ASEAN’s journey so far.

Chinese President Xi Jinping has outlined his vision of a new type of security for Asia by the Asians and has spoken about a new type of relationship between China and ASEAN.[11] China’s economic influence in the region, its geographic immediacy to Southeast Asia, its active engagement with the countries concerned, its multidimensional cooperation strategies and lastly, its huge market make it a truly ‘strategic partner’ of ASEAN. Thus, it is likely that both China and ASEAN would try to prevent any escalation in the South China Sea. In fact, with the inauguration of Trump administration in the US which has already rejected former President Obama’s Pivot to Asia policy (including the Trans-Pacific Partnership), a new bonhomie between China and Southeast Asia are likely to be moulded.

However, besides the traditional security issues, ASEAN as a regional institution is also faced with several non-traditional security threats in the forms of climate change, cross-border insurgency and international terrorism, illegal movement of people, trafficking and so on and thus, making ASEAN unified and inclusive is necessary to face these challenges.

ASEAN’s insignificance was marked by many in its initial years. The fact that two other efforts of regionalism in Southeast Asia, namely, the Association of Southeast Asia and the MAPHILINDO (Malaysia, Philippines, and Indonesia) ended within few years after their creation, signalled the same idea about ASEAN’s untimely death. The Malaysia–Philippines dispute over Sabah in 1969, the outcome of the US withdrawal from Vietnam in 1975, the Vietnamese invasion of Cambodia in 1979, the end of the Cold War, and the outbreak of the Asian financial crisis in 1997, had all been seen as major setbacks to ASEAN. But ASEAN continued its journey and became a little stronger each time. So the survival of ASEAN in the future is somehow confirmed. However, the question is, ASEAN’s mere survival does not guarantee its emergence as a vibrant and dynamic community which can ensure security, peace, stability and development for the region. Finally, to quote it from Mely Anthony (2005), what ASEAN now needs is a “we feeling”, a sense of common regional identity to be shared by all members (both the states and common people) to resolve regional issues together. [12]

Dr. Sampa Kundu is a Researcher at the South East Asia and Oceania Centre of the Institute for Defence Studies and Analyses, New Delhi. Views expressed here are personal.

[5] Philippines’ submission to the Permanent Court of Arbitration (PCA) against China’s assertiveness in South China Sea, Vietnam’s strong actions against China’s oil rig deployment can be termed as exceptional behavior by the Southeast Asian countries to demonstrate opposition to China.