Pharmaceutical Provisions in the Trans Pacific Partnership: A Glass Half-full for Indo-Japan Trade in Generic Medicines 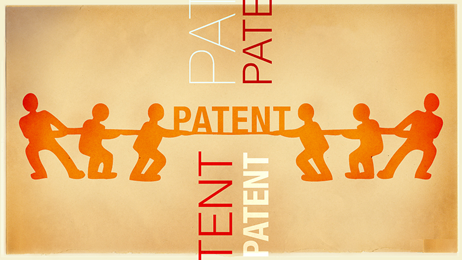 After more than five years of negotiations the Trans Pacific Partnership Agreement (TTP) has been signed into existence. The agreement has proven to be a ‘Lernaean Hydra’ by refusing to succumb and has come through despite several reports of the negotiations falling through on account of intense opposition from both the left and the right in the US and differences among the 12 TPP member states.[i] The member countries have a combined GDP of US $28,136 billion on 2012 figures, which represents almost 40 per cent of the world’s GDP, but interestingly two economies out of the twelve represent half of that 40 per cent: US and Japan. Hence TPP, in essence, is largely a US-Japan bilateral pact, with 10 other medium to small economies pitching in to make it “mega-regional”.[ii] Eventually it will come into effect only after each of these ratifies the agreement, which remains to be the next big challenge for TPP.[iii]

One of the stated principles of the agreement is to ‘remove protectionism while providing protection’ by creating a more harmonized trade milieu[iv] and removal of tariff and non-tariff barriers. Notably the debate around TTP has been shrouded in controversy and contention because of the lack of the official documentation in the public domain and a concomitant leak of the drafts of the ‘negotiation text’ almost every year.[v] In particular, the intellectual property (IP) provisions pertaining to pharmaceuticals[vi] (from these leaks) have been one of the most contentious areas around the negotiations.[vii] The ramifications are clearly far beyond the economic benefits derived out of reducing tariffs.[viii]

The TPP represents the shift of focus from the multilateral arena to bilateral and regional trade agreements to increase opportunities for pursuing several overarching goals which has come to be described as “forum shifting”[ix] i.e. negotiating at several international forums than betting on one.[x] This when coupled with a “template approach”[xi]  (where the provisions from every successive pact serve as a benchmark to expand the ambitions for the next round of negotiations) has proven to be a successful strategy – ratcheting up of IP provisions in TPP is a case at hand. At the centre stage of this strategy and leading the charge is the United States and its allies.

If the ‘pharmaceutical provisions’ of the unofficial leaked drafts of TPP ‘negotiation text’ are assumed to be true then clearly the ambitions have been set towards a TRIPS-Plus IP template.[xii] Significant among these pharmaceutical provisions are that of Patent Term Adjustment[xiii]; Regulatory review exception[xiv]; Pharmaceutical Data protection – market and marketing exclusivity[xv]; Public health safeguards (compulsory licensing)[xvi] Patent Linkage[xvii] etc. The “template” approach coupled with a “forum shift” has successfully rendered the TRIPS agenda a moderate and milder version of the IP provisions in the later negotiated FTAs. But interestingly the latest leaked draft[xviii] is composed out of a markedly different language than its predecessors – a political compromise is practically couched in all the above listed pharmaceutical provisions.[xix] Although these provisions successfully extend the monopolistic rents for owners of IP, the same is not to the extent as has been estimated before. The unofficial TPP draft looks like a major leap towards a TRIPS-Plus template from the TRIPS template, but not the former itself. The enlisted provisions would certainly restrict early entry of generic medicines and can lead to price escalation in the absence of a healthy generic competition. This may further put fiscal pressures for the member countries in TPP[xx] but concomitantly incentivize them to look at the unprotected generics (without patents protection) with a renewed perspective – especially post the ‘patent cliff’.[xxi] The case of Japan is particularly interesting.

With a rapidly dwindling working age group population and the highest life expectancies in the world, the social security expenditure for Japan has ballooned, which has more than doubled in the past 20 years.[xxii] The rising trend of national medical costs/expenditure on pharmaceuticals is a significant head under these expenditures (See Fig. 1).

A health system allocating more resources for pharmaceutical expenditure may bring a concomitant rise in opportunity costs – more money spent on drugs would mean less money available to be expended on other health services and preventive health care. Further to render such a health “safety net” sustainable, patient co-payments may have to be increased- a fairly sticky subject among citizens. The use of already available generic medicine for deploying health safety nets would certainly bring down the cost born by an already burdened economy. This is all the more important for the Japanese economy as currently it utilizes the least number of generic medicines amongst its contemporaries (See Fig. 2).

Figure 2: Utilization of generic medicines within the unprotected markets 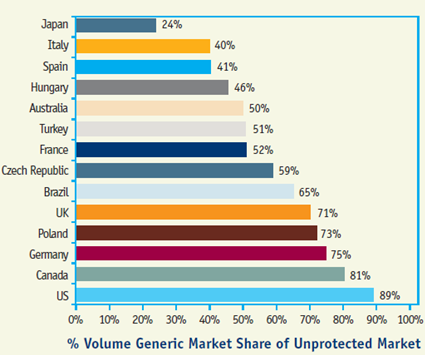 US and Japan the top two economies in the TPP are incidentally also the top two pharmaceutical markets in the world respectively. Of the close to Rs 98,000 crore pharmaceutical exports from India in 2014, Japan accounted for just over Rs 400 crore (a mere 0.004 per cent), primarily active pharmaceutical ingredients (APIs)[xxiii] and herbal products.[xxiv] In terms of manufacturing locations of API suppliers, close to 50 percent of the Active Pharmaceutical Ingredients used to manufacture medicines supplied in Japan comes from three nations: China, India and South Korea, none of which is a trading partner in TPP (See Fig. 3). The TPP is an important agreement which will equally erode the trade advantages that these three economies currently enjoy with the TPP member countries, inducing them to enter into several pacts so as to exploit any niche available for trade.

With TPP in sight, the overall pharmaceutical expenditure for Japan and other few may further grow and in the wake of such a scenario, these dispensations may start looking at a more liberal use of generics. For India the challenge is to break open the Japanese market which traditionally has been a tough market for Indian pharmaceutical manufacturers.[xxv] Stringent regulations and cultural skepticism of generic medicines have made the Japanese market averse to them. There is need to engage with Japanese generic companies to source generics from Indian generic manufactures via contract manufacturing partnerships and collaborations. There is a tremendous opportunity for the Indian pharmaceutical industry for exporting generics to the second largest pharmaceutical market in the world. The TPP will force India to ride on the harmonization bandwagon in the long run, but in the short run there are low hanging fruits to be exploited. We can either choose to fret – see the glass half empty or actively engage – see the glass half full.

(* The author is a Research Associate at Indian Council for Research on International Economic Relations and a doctoral candidate at Centre for Studies in Science Policy, Jawaharlal Nehru University).

ICRIER does not take specific policy positions; accordingly, all views, positions, and conclusions expressed here should be understood to be solely those of the author(s)

[vi]  This piece discusses only a subset of these provisions those that relate to pharmaceutical products.

[viii] Frankel J. (2015), ‘Why support TPP? Critics should read the agreement and keep an open mind’, The Guardian. Available at: http://www.theguardian.com/business/2015/oct/11/why-support-tpp-critics-read-agreement-keep-open-mind

[x] For instance the United States has free trade agreements (FTAs) in effect with 20 countries. These FTAs build on the foundation of the WTO Agreement, with more comprehensive and stronger disciplines than the WTO Agreement. Many of the FTAs are bilateral agreements between two governments like Australia US FTA (AUSFTA), Korea US FTA (KORUS) etc. But some, like the North American Free Trade Agreement and the Dominican Republic-Central America-United States Free Trade Agreement, are multilateral agreements among several parties.

[xiv] It is a ‘safe harbor’ provision that permits manufacturers of generic medicine to make small batches of medicines to apply for marketing approval before the patent expires without risk of liability for infringement. This is also referred to as the ‘Bolar exception’ in the United States.

[xv] In some dispensations, it is possible for a manufacturer of generic medicines to submit a literature-based application, relying on efficacy and safety data already in the public domain rather than on the dossier submitted by the market authorization holder. A literature-based sub­mission is not possible unless protection is limited to undis­closed data. This distinguishes a data (marketing) “protection” from a data (market) “exclusivity” regime.

[xvi] A compulsory license provides that the patent owner licenses the use of their rights against payment either set by law or determined through some form of arbitration. In essence, under a compulsory license, an individual or company seeking to use another’s intellectual property can do so without seeking the rights holder’s consent, and pays the rights holder a set fee for the license.

[xvii] ‘Patent Linkage’ refers to the regulatory practice of linking the marketing approval of a pharmaceutical product to the ‘patent status’ of the original drug with the market authorization holder in order to ensure that for on patent drugs, marketing approval to a third party of a generic imitation is only granted upon patent expiry or with the consent of the former.

[xviii] The IP chapter released within four days after the announcement of the TTP.

[xix] Several flexibilities and choices have been brought about in the latest draft rendering a sui generis orientation and implementation by member countries. The various ‘annex’ listing IP flexibilities for respective countries in the draft testify to the above conjecture.

[xx] In some of member countries in the TPP, the health and social security expenditures have already skyrocketed; any further escalation of the same may threaten a collapse of these systems. The member countries of TPP range from the mighty US to a developing country like Vietnam where over 48 percent of the population was living on less than U.S. $2 per day in 2002-2007. See, United Nations Development Program, Human Development Report, 2009, UNDP, New York, at 177, available at <http://hdr.undp.org/en/media/HDR_2009_EN_Complete.pdf>

[xxi]  A disproportionately large number of patented drugs that have formed the mainstay of pharmaceutical profits will see their patents expire in quick succession in the period between October 2011 and December 2016, a phenomenon widely termed as the ‘Patent Cliff.’ For a more detailed exposition see, Khanna AR & Singh HK (2015), ‘India’s IPR Regime: Reconciling Affordable Access with Patent Protection’, Strategic Studies Programme, ICRIER, pp. 44-47.

[xxii]  The social security expenditure in 2011 in Japan stands at Yen 107.8 Trillion, against the Yen 47.2 Trillion figure in 1990. Source: Ministry of Health, Labour and Welfare, Japan, available at: http://www.mhlw.go.jp/english/social_security/kaikaku_1.html

[xxiii] API refers to the substance behind the clinical and therapeutic effects of a medicine.