Nuclear Security Challenges in the Asia-Pacific 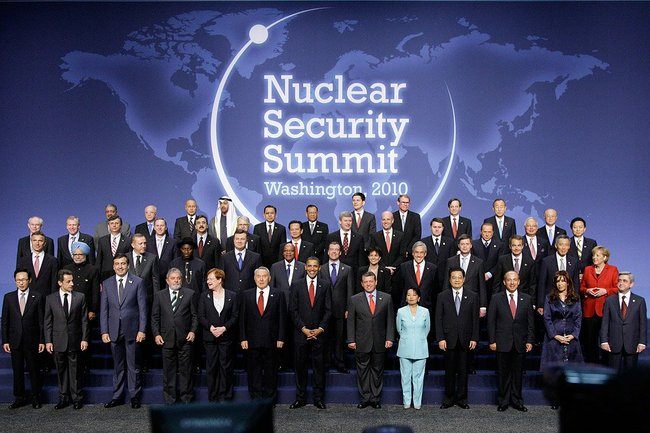 The traditionally weak international nuclear security regime has been afforded a significant fillip with the initiation of the Nuclear Security Summit (NSS) process, which has been successful in creating high political visibility for the challenges facing global nuclear security. However, with the last installment of the Summit scheduled for 2016 in Washington, DC, it is unclear whether this momentum will persist.

First, the nature of the commitments made by the states involved in the process is entirely voluntary. Second, there is no viable alternative to the NSS once it lapses. Thus far, it is claimed, the IAEA is not equipped to take on the maintenance of the nuclear security regime in its entirety due to a constraint in resources, and an enduring debate between member states on the desirability, as well as feasibility, of granting the organisation this role.

However, in the absence of a globally binding mechanism to bring together all the disparate strands of nuclear security (all commitments and responsibilities are the prerogative of sovereign states), the IAEA will most likely have to step up to the plate. Whether it will be able to sustain the push created by the NSS process is a matter of conjecture.

It is in this environment that nuclear security in the Asia Pacific becomes especially relevant. Four key issues make a study of the attendant infrastructure and governance concerns germane. One, Asia is witness to a growing interest in the pursuit and expansion of civilian nuclear programmes. Two, Asia is host to a number of nuclear-armed states. Several among them continue to develop capacity for fissile material production to make nuclear weapons. Three, there is the issue of non-state actors and sub-conventional warfare, allegedly often state-sponsored, which could arguably afford the offenders relatively easier access to nuclear infrastructure and know-how. Four, these problems are further compounded by geographical vulnerabilities such as inter and intra-state geopolitical tensions and porous borders that make cross-border smuggling an attractive proposition. This rounds off a fairly alarming scenario, made more disquieting given the lack of an adequate regional nuclear security framework.

These four issues effectively demonstrate the critical intersection of nuclear safety and nuclear security and the vulnerable environment in which they operate in the Asia Pacific. This necessitates a comprehensive and synergistic approach to tackle these challenges, some of which might very well contain a combination of elements of both.

What characterises nuclear security in the Asia Pacific?

There are many calls for states to attempt to bridge this gap between transparency and secrecy, but the bottom-line here is: where is the line drawn in the exercise of revealing information? Since the perception of the risks posed to nuclear security would vary from state to state, a uniform standard of transparency would be difficult to gauge. How is not-too-sensitive information determined, and distinguished, from very-sensitive-information, especially if this significance could be accorded by potential perpetrators, who decide what, and how much, is useful for them?

Another point of concern is the unevenness of accession to and ratification of existing nuclear security conventions by states across Asia, such as the 2005 Amendment to the Convention on the Physical Protection of Nuclear Material (CPPNM) and International Convention for the Suppression of Acts of Nuclear Terrorism (ICSANT), which leads to a further weakening of the nuclear security regime.

One of the more promising developments to have emerged in this context is the establishment of nuclear Centres of Excellence (CoEs) in different states across the Asia Pacific, which were first offered as ‘gifts’ during the NSS process. However, these are voluntary in nature, and borne chiefly out of the very high political visibility of the Obama-led NSS, which was a strong inducement for states to pledge their support. Following the end of the NSS, it remains to be seen whether these initiatives are likely to be championed with the same enthusiasm. Even if they were, they would require proper cooperation and coordination to ensure effectiveness.

The implementation of regional nuclear security measures in a format therefore that is workable, and acceptable to all involved states, is essential. The concerns discussed above confront all states globally – an accident/incident in one state will have implications far beyond its national borders. Nuclear security, rife as it is with challenges, is an important cog in the wheel of the international nuclear order, and its maintenance will provide meaningful impetus to both nuclear non-proliferation and disarmament goals, all of which, although upheld and negotiated on separate tracks, come together to form a cohesive whole.