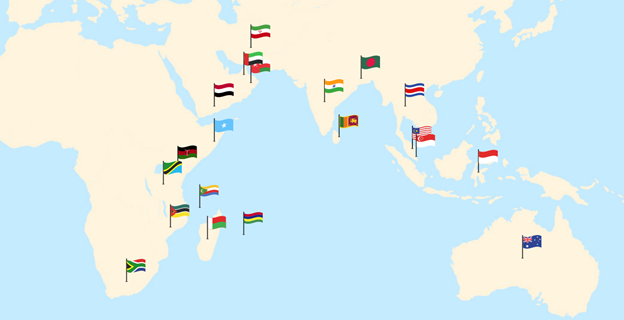 The Jakarta summit held on 5th-7th March 2017, marks renewed interest on the part of member states, primarily for India, Australia and Indonesia. The summit culminated on an optimistic note with the signing of Jakarta concord. The Concord could be viewed as an attempt to bring/move towards a rule-based framework in the Indian Ocean Region. Hitherto, confined to enhancing economic gains. The Concord identifies several priority areas namely,

Besides, the declaration on preventing and countering violent extremism was another significant outcome of the meet.  The following statement from the Indonesian Prime Minister succinctly describes the summit:

“We have just concluded the first IORA Summit. The meeting went well in a productive and constructive manner. In addition to commemorating the 20th anniversary of IORA, the convening of the Summit is a strategic and progressive step by IORA Leaders to realize an IORA that is able to move faster, able to face the current situation, and able to deal with future challenges. The current Summit is also a milestone in the renewal of commitment by IORA countries to intensify IORA cooperation.”

This meet assumes greater importance in the context of recent geopolitical development around IORA.  The spurt of articles written by policymakers and academics bore apprehension regarding the success of the IORA as a formidable regional institution.

India and the Indian Ocean Region- Towards strategic reorientation?

India took the initiative to revive the moribund idea of Indian Ocean Regionalism. An Increase in India’s seaborne trade along with Beijing’s foray into the littoral states acted as a trigger for New Delhi. According to Schottli (2012) there are three major factors to be pondered upon:  the recognition given to maritime security and the need to invest in modernization of the navy and coastal defense; the new enthusiasm with which co-operation with major naval powers such as the United States, Japan and Australia is undertaken; and a marked departure from traditional rhetoric about the Indian Ocean.

Maritime security received a great deal of attention in India post 26/11. India is repeatedly trying to boost cooperation with the littoral states for sharing of real-time intelligence. It has even set up National Command Control and Communication Intelligence (NC3I) with focus on building national maritime domain awareness. The mushrooming up of Chinese ports (Gwadar, Hambantota and Djibouti) in the Indian Ocean Region coupled with  Beijing’s high handed approach to the near threatening of freedom of navigation in South and East China Sea have raised the alarm in New Delhi.

Besides, Security consideration. There lies strong economic motive as Indian companies have invested significantly in the oil and Infrastructure projects across the region. India’s development is contingent on uninterrupted oil/gas supply. 90 percent of India’s trade by volume and 68 percent by value happens via the Indian Ocean. World’s most important choke points including Strait of Hormuz and Malacca accounting for than 50 percent of maritime trade are situated here. The remittances from IORA amounts to 3.5 million. These considerations are propping India to reorient its strategy in the region.  The region is witnessing close military cooperation with the countries like the US, Japan and Australia. Joint Naval exercise (Malabar) has become a routine event. There has been a renewed push for Indo-Pacific Quad. The region is witnessing the steady embrace of outside powers, unlike earlier times when the primary aim was to keep outside influence at bay.

There exist formidable challenges towards effective realisation of the same.  The IORA is extremely diverse in its setting compared to EU or ASEAN. Also, there is a geographical disconnect. IORA comprises of developing nations who lack adequate economic and institutional prowess to boost the grouping. Australia and Singapore are the only developed economy. The exclusion of key states like Maldives and Timor-Leste could further undermine the potential of IORA.

The way forward in the IORA

The growing importance of Indian Ocean Region could be leveraged by IORA to be a formidable regional organisation. India’s willingness to work with the member nations on the needs of secure and free navigation needs to be reciprocated.  IORA members need to make a collective push for maintaining the ongoing stability/openness in the region.

Attempts should be made to foster commonality in the IORA. There is need to develop Indian Ocean identity. To realise it, virtual IORA University at Mauritius should be upgraded to the full-fledged university on the lines of SAARC University. This would provide a platform for young minds/leaders to interact and develop a shared understanding. There is an urgent need to upgrade IORA charter to the level of a treaty. It will increase the standing of the organisation in the eyes of international community.

IORA members should further cooperate on non- traditional security issues as the region is marred by poverty, calamity and piracy. In words of S.Jaishankar, “India’s attempt to secure shipping traffic in the past from pirate attacks has immensely contributed to the cause of maritime security. Besides, HADR search and rescue operations in Lebanon, Syria, Iraq and Yemen have benefitted not only Indian nationals but the region at large. From drinking water in Mauritius to airlifting relief to Fiji and Sri Lanka. India has been proactively collaborating on the issue of non-traditional security”.  To make the regional grouping effective, IORA members need to develop a mechanism to address non- security threats.

Regional groupings like BIMSTEC and RCEP could be aligned to boost the liberal trade regime in the IORA region. Private sector linkage should be encouraged. Business travel card could be issued by IORA countries. India has already shown its enthusiasm by signing MSME memorandum with the member states. Thus, the revival of interest in IORA comes at significant/opportune geopolitical turn. The evolving context could be judiciously channelised by IORA members to maintain the existing peace and stability in the region.

Paras Ratna is a student at the Tata Institute of Social Sciences (TISS). The views expressed here are personal.