Home   Migration and Human Security in the Asia-Pacific: The Role of Regional Institutions and Powers

Migration and Human Security in the Asia-Pacific: The Role of Regional Institutions and Powers

The following article is based on a speech given by Arnab Dasgupta at the Young Scholars’ Forum on January 13, 2017. 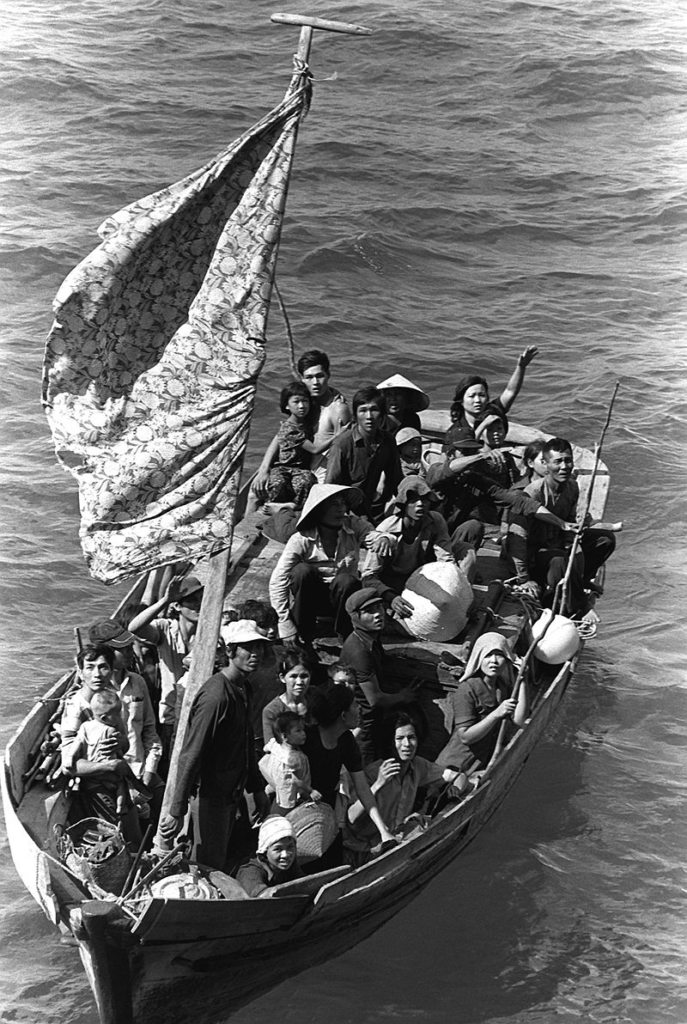 Vietnamese refugees wait to be rescued from a fishing boat 350 miles northeast of Cam Ranh Bay, Vietnam, after spending eight days at sea.

This is the age of unprecedented human migration, an era when a significant number of people are moving across borders. Yet it is also an era where migration journeys are fraught with ever more unprecedented perils, and the forces arrayed against them are more robust and complex. In this brave new world, states, whether of origin or of destination, find themselves increasingly helpless to fight for the rights and security of their citizens who cross borders, particularly since they find themselves alternatively as protectors of their citizens’ rights abroad while being arbiters (and occasionally deniers) of the same human rights domestically for foreign residents in their territory. The threat is new, vast and complex, and increasingly states are beginning to answer in zero-sum terms, as witnessed by the world in several parts of the world this past year, where the rights of some attained out-sized importance vis-a-vis the rights of the Other. The present paper proposes to look at the problems unique to migration in the Asia-Pacific and attempts to work out solutions based on a human security-driven practice that must be adopted to ensure that the benefits of migrants are available to all without imperilling the security of anyone.

As this old paradigm of security comes to be seen as moribund, threats to ordinary citizens continue to multiply. It is in this context that the concept of non-traditional security, especially human security, attains salience. Human security, as defined by the Citizen’s Network for Peace, Reconciliation and Human Security, is ‘an alternative approach to the security of individuals and communities referring to both ‘freedom from fear’ and ‘freedom from want’’ (Citizens Network for Peace, Reconciliation and Human Security nd.), the freedoms referred to first articulated by President Franklin D. Roosevelt in the 1940s. Comprised of seven components, human security ‘encompasses … conflict prevention, crisis management, and civil-military relations and furthers them through widening the definition of ‘insecurity’ and adding a human rights and human development-based perspective to security policies’ (ibid.) The focus of human security policies are not nations or conglomerations thereof, but rather individuals and communities, which makes them fairer and more humane.

Are human security policy concepts relevant to the Asian experience? A growing body of literature indicates that may be so, but a similarly large body of opinion would have it that human security as an idea is fundamentally flawed because it was originated by and remains the special concern of Western, that is, non-Asian governments, who are perceived as opportunistic actors who hold Asian nations to a double standard they do not respect. As pointed out by UNESCO (2008): ‘the reason the idea of human security has not made inroads into security thinking in South-East Asian states and…ASEAN is the underlying suspicion that the concept represents a Western agenda’ of intervention in domestic sovereignty. The logical solution to this conundrum would be an Asia-Pacific led process of co-opting human security policies to ensure freedom from unwanted oversight, but this runs against a high wall of incommensurability, brought about by the incompatibility of many value systems as well as the severe lack of democratic institutions that (as we shall see) are also a feature of the Asia-Pacific.

Does the Asia-Pacific region need human security policies? The answer is an unqualified yes because the region is at par with the rest of the world when it comes to suffering from the effects of non-traditional security threats. Several countries in the region have borne the brunt of fundamentalist terror, while several others suffer from the cataclysmic effects of climate change. Poverty remains a common concern of almost all the countries in the region. Developmental trajectories remain widely divergent, with post-capitalist, hyper-advanced countries such as Japan, Singapore and Australia existing with neighbours who are developing apace (India, China, Thailand, Vietnam, Indonesia, and Malaysia) as well as those stuck in spirals of chronic poverty (the Philippines, Laos, Cambodia, Myanmar, and the island republics of the South Pacific) and a nuclear-armed clique-state with a singular path (North Korea). Development is managed by political regimes as widely varied as one-party authoritarian states (China, North Korea), de facto one-party states (Singapore, Vietnam) and vibrant, multi-party democracies (Australia, India, Japan, South Korea et al.) Regional organisations such as ASEAN, SAARC and APEC exist but consistently punch below their weight in terms of impact.

Given this background, it should be no surprise that the Asia-Pacific lists as one of the most active regions on the migration map, with migrants, forced and free, making their way to other countries within the region as well as to other regions in the world. In the Asia-Pacific, victims of forced climate displacement rub shoulders with a bewildering variety of economic migrants, conflict refugees, internally-displaced persons and skilled cosmopolitans with multinational trade ties within and outside the region. Yet the environment for their reception remains similarly bewildering: from countries with active skill-based recruitment programs such as Japan, South Korea and Australia to those with race-based return programs such as Malaysia, the Philippines and China, all the way to a closed country with no immigration, but a significant emigration stream: North Korea. In almost Asia-Pacific countries of immigration and emigration, however, policies to promote safe migration which is cognisant of migrants’ human rights and physical integrity remains differently understood and empowered.

Migrants, as bodies moving across borders, as inheritors of multiple cultures, and as the foot-soldiers of economic globalisation encounter several types of human insecurity during their migration journey. Some, such as economic, sexual and physical insecurity, are a tragically common feature of journeys made by refugees and so-called ‘illegal’ migrants, who despite their valuable role filling up the trenches of modern capitalism remain easy scapegoats for populist mobilisation. Other types of insecurity, more difficult to quantify, are common to all migrants who choose to stay in a host country, ‘legal’ or ‘illegal’, instead of jetting their way peripatetically across countries and continents as the very top tier of capital-fuelled migrants do. These insecurities stem from the incommensurability of laws between countries, the attitudes of natives and the cost-benefit calculations of corporations for whom migrants remain just another tool in the box. To ensure the human security of all migrants, it is imperative on all countries in the Asia-Pacific region, sending and receiving, to 1) prevent the policy diffusion of negative legal precedents currently being adopted by Western countries of immigration to deny migrant rights, 2) cooperate positively in regional multilateral fora to take decisive action during times of crisis to ensure flows of forced migrants remain minimal and correctly channelled, and 3) to immediately ratify and adhere to all relevant international legal documents pertaining to migrants, such as the International Covenant on Migrant Workers and their Families (ICMRW).