Home   Maritime Security Cooperation in Asia-Pacific: A Perspective from India

Maritime Security Cooperation in Asia-Pacific: A Perspective from India 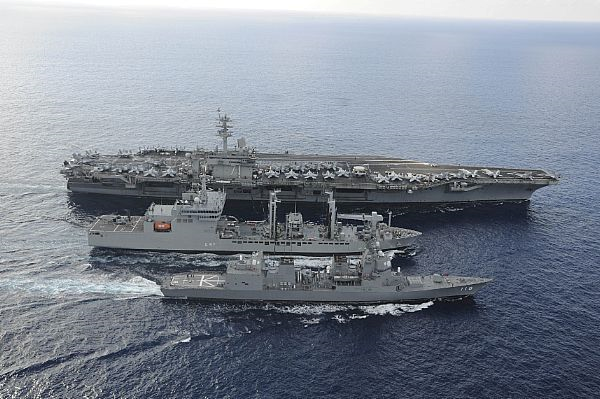 The Asian maritime domain is undergoing some significant changes. Territorial disputes in the South China Sea and increase in competition for strategic space in the Indian Ocean is leading to a hostile security environment. While on the one hand Asia depends on American security forces to maintain peace and stability in the region, the rise of China and India are quickly emerging as the alternate option for a new security order. The tussle for power and the need to project the same is increasing tension with a higher risk for an armed conflict in Asia-Pacific.

There are a number of mechanisms already in place to manage tensions in the maritime domain, however, strategic interests, different interpretation of law and difference in approach to resolution of disputes have rendered them ineffective. What the region requires is, to establish norms of behaviour on high seas and a structure to implement the same. Given the multitude of differences between the claimants and other regional powers, an international treaty or a legally binding agreement on rules of behaviour is highly unlikely in the near future. Therefore, maritime security cooperation in Asia-Pacific is taking a sharp turn toward a multilateral framework to uphold the established norms of behaviour. Territorial disputes and changing power dynamics is essentially creating space for collaborations between the navies of the region.

As the maritime developments continue to shape the security environment in Asia-Pacific, India stands at an interesting nexus of sustaining the established order and shaping the evolving one. New Delhi has been for far too long comfortable with its position in the Indian Ocean which remains the primary area of interest for the Indian Navy. Changing geopolitics is however forcing Indian policy makers to look toward the maritime domain along with its continental troubles.

There is tremendous amount of support from regional powers such as the US, Australia and Japan for India to take on a leadership role shouldering its responsibilities in holding forth the current security order.  India is being encouraged to emerge as the net security provider in Indian Ocean region and regional navies stand ready to cooperate and collaborate with New Delhi. Furthermore, China is pushing forward the idea of “Asia for Asians” wherein the Asian security structure is created, sustained and maintained by Asian powers. New Delhi appears to be a critical factor in both the frameworks- maintaining the current one or in establishing a new one. It is worthy to note here, China’s concept for a new security framework need not necessarily aim to replace or break down the current security order. It however does, change the status quo.

As India wakes up to the great game unfolding in the region, it is beginning to take stock of its own strategic interests and adapt to the changes occurring in its neighbourhood. There appears to be shift in New Delhi’s maritime strategy reflected through its participation in the debate on the South China Sea and its growing maritime linkages. India is forging new naval ties and strengthening older ones suggesting its political will to take a stand in the changing security matters of the region. India’s stand is unlikely to be in favour of or against any policy or group of powers and more so with its own take toward the developments in the maritime domain. New Delhi is currently struggling to establish itself as a credible security provider with a mild backlash regarding its lack of presence throughout the Asia-Pacific. This sentiment is particularly being echoed by India’s ASEAN friends embroiled in heated territorial disputes with China in the South China Sea. While India will not engage in any direct confrontation with China or other disputing nations in the South China Sea, it is being increasingly vocal about the need to resolve the issue. India is also setting examples by resolving its own maritime boundary disputes in the Bay of Bengal which is emerging as a benchmark while discussing dispute resolution mechanisms in Asia-Pacific.

Essentially for India, the changing dynamics of the region is creating viable ground for maritime security cooperation with other countries. Both in the South China Sea and the Indian Ocean region, the Indian Navy is taking steps to strengthening its maritime links. India signed the “US-India Joint Strategic Vision for the Asia Pacific and Indian Ocean region”, continues to strengthen its ties with Vietnam and the Philippines, held its first bilateral naval exercise with Australia and invited Japan to participate in the MALABAR 2015 exercises. Additionally, New Delhi is also looking to renew its ties with Indonesia, underlined its commitment to its ASEAN friends through the Look East Policy and furthering its relationship with the Indian Ocean littorals, going as far as the South Pacific islands.

There is no doubt that New Delhi is renewing its maritime engagements and attempting to look at the domain through new lens. Multilateral collaborations are the most effective model in managing tensions in Asia-Pacific and India is committed to this framework. A coalition of likeminded nations is the best way forward in keeping the region stable and deterring unilateral and assertive actions on the high seas. The goal now is to diffuse any tensions that may arise threatening the security order in the region, leaving enough space for other effective methods of cooperation to emerge. While there may be disappointments regarding the pace of India’s willingness to play a security actor, New Delhi nevertheless is committed to being one.

The challenge lies in sustaining the momentum and taking it forward rather than losing its ground and getting caught unaware in the changing security dynamics of the Asia-Pacific region.  As the security architecture in Asia-Pacific continue to evolve, New Delhi’s maritime policies will bear significant consequences in the road ahead for the region.

The writer is a Junior Fellow at the Observer Research Foundation working on maritime security issues in South China Sea and the Indian Ocean region.