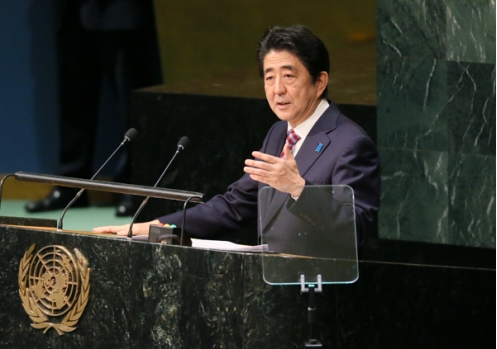 A pacifist nation since the end of the Second World War, Japan has sought to maintain international peace and stability by renouncing the use of force to settle international disputes. In 2013, Japan under Prime Minister Shinzo Abe declared the foreign policy of ‘proactive contribution to peace and stability’ which would involve re-interpretation of the right to collective self-defense. The Liberal Democratic Party (LDP) government currently in power aims to re-position Japan in the international stage and embolden decision making in times of any ‘gray zone conflicts’. However the leadership has been unsuccessful in emphasising the reasons between adopting strategic means to achieve peaceful ends because of the manner in which war and peace is woven into the domestic fabric of the nation state. Additionally this question of means and ends is impacting the national security policies of Japan.

In the past, as Japan’s Diplomatic Bluebook notes, Japanese contribution to peace included- its membership in the United Nations, its high economic growth and provision of technological services, the Official Developmental Assistance program, setting an agenda for disarmament and non-proliferation regimes as well as establishment of an international economic and financial order through IMF and GATT. Japan has had a piecemeal or incremental response to tackling security threats as they unfolded, such as the passing of the Peacekeeping Operations and Other Operations Act (PKO Act) in 1992 to participate in UN PKO missions, the Piracy and Countermeasures Act in 2009, to tackle maritime piracy in the Gulf of Aden.

But with the widening of security challenges, the present government under the LDP has decided to rewrite and modify the response mechanism to these national security threats through a legal procedure; thereby leaving the decision to the discretion to the ones in power. Let us begin by first scanning the rationale for a proactive policy before understanding the legal foundation of the response mechanism. Firstly, some of the potential flashpoints in the Asia-Pacific that Japan is cautious about are the East China Sea, South China Sea, North Korea’s missile and nuclear development. Secondly, it is also cautious of the shifts in power in the international order specifically in the Ukraine crisis and emergence of Islamic State of Iraq and the Levant (ISIL). Hence Japan of the 21st century is at a crucial juncture wherein “any threat irrespective of where they originate in the world, could have a direct influence on the security of Japan”. Thirdly, Japan has identified the free access to seas, outer space, and cyberspace as matters of concern for the government. The United States had once upon a time, secured the high seas and ensured smooth transit of maritime commerce, but in present day scenario, Japan believes “no single country can secure peace by itself” and the onus lies on Japan as demanded by the international community for Japan to “play a proactive role to ensure global peace and stability of the world within the limits of its national capability”.

The dichotomy between war and peace is one which several countries have sought to address. Japan is in unique situation because the tenets of initiating a war and of using coercive diplomacy (primarily via offensive means) are curtailed under the Article 9 of the Constitution. Wherein Japan (out of self-imposition) has renounced war potential (of possessing any offensive capabilities) and has renounced the use of force and threat of use of force to attack. Japan retains the right to self defense defined under Article 51 United Nations Charter. But Japan under Abe government has faced a lot of flak for being unable to change the discourse on war and peace, to define the pursuit of security against threats and list the limits and delimitations of doing so.

Any response would be based on the US-Japan security alliance as it is termed as the cornerstone of Japan’s national security. The re-interpretation of the law now allows for use of force to a “minimum extent” under three conditions- (i) if US forces while defending Japan are attacked around Japanese territorial waters (Senakaku/Diaoyu) then Japan can come to rescue. Recent remarks issued by Special Advisor to Japanese Prime Minister Ryutaro Hashimoto (1996-98) and Junichiro Koizumi (2003-04) Mr. Yukio Okamoto, in a seminar organized at ICRIER in New Delhi confirmed that if Japanese maritime patrol vessels operating attacked by ISIL, it would warrant a response within collective self-defense. (ii) If Japanese friends or countries in ‘close relationship’ are attacked while defending Japan or its interests, Japan could justify the right to collective self defense. (iii) If the right to life, peace, liberty and happiness of Japanese citizens are threatened, Japan could use force to a ‘minimum extent’. Thus Japan has sought to weave traditional security threats as well non-traditional threats like human security without differentiating the means employed to tackle them. Present day security challenges appear to be complex and ambiguous in its urgency and impact thus requiring future governments to be more vigilant and prudent.

These responses will be coordinated (or consulted) within the bilateral security alliance with the United States. Japan’s national security policies include- enhancing deterrence, strengthening the defense of territory and territorial waters as well engaging in conflict prevention, humanitarian assistance, reconnaissance assistance, fuel and food supply.

Akira Iriye, a historian at Harvard University once elaborated on this dichotomy between war and peace in US-Japan relations. For Japan, he believed, peace was “domestically generated”. Japanese citizens post American Occupation (1952) believed that “there would be no peace, unless the countries of the world were themselves peaceful”. Thus when designing the security institutions of Japan according to Iriye, “a key assurance that Japan remained peaceful according to Japanese thinking, would be its refusal to undertake rapid armament expansion”. Thus fast forward to 2015 when the Japanese Diet was debating the security laws the heated protests and massive campaigns to undermine or malign the actions of the government could be contextualised in this analysis.

Japan is known to adapt to changes in the international order predominantly since the Meiji period (1868-1912) when power politics was dominant, Japan strived to become one amongst the Imperialist powers, eventually as societal principles, norms and political values changed, Japan transformed to become a peaceful democracy in a liberal international world order post the Second World War avoiding much of the realpolitik that the superpowers pursued. Under Prime Minister Yoshida Shigeru’s leadership Japan successfully pursued an economic policy (mercantile realism) while relying on US security and nuclear umbrella. This separation of security and economics lasted for a while until the Oil Shocks in the 1970s. To use economic means for political ends fitted in the liberal international system. But in the present system, when diplomacy has become more nuanced, when classical geopolitics has re-emerged in a post-industrial age of automation and instantaneous communication, the fissures in the international system are much more visible. Thus in order to sustain its ambitions as a great power in this Asian century, Japan apart from transforming its approach to the international power shift has to transform the domestic discourse on national security.

Nidhi Prasad is pursuing her M.Phil in Japanese Studies, at the School of International Studies, Jawaharlal Nehru University.