The following article is based on a speech given by Gaurav Dutta at the Young Scholars’ Forum on August 19, 2016. 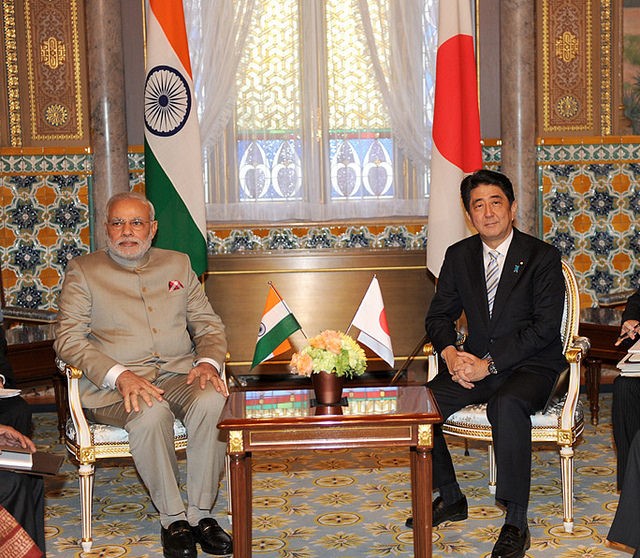 Japan and India relations have come a long way from the Cold War eras to the 21st century. The 21st century has seen major developments and rapprochements between both the nations. India and Japan ties was at its lowest after India conducted its nuclear tests in Pokhran (1998), whereby Japan along with the U.S. had imposed sanctions on India. This deadlock was broken after Prime Minister Mori made his first visit to India in 2000, whereby Japan resumed its normal ties with India and pushed forward for a Global Partnership. It was then followed by Prime Minister Koizumi’s Visit in 2003 where the India-Japan relations took a strategic turn, when the strategic angle was implemented to the global partnership. This was a turning point in Japan-India relations when it went beyond the traditional economic relations, and a strategic perspective was developed. Thereafter, Shinzo Abe’s speech at the Indian Parliament in 2007 “Confluence of the Two Seas” and Taro Aso’s “Arc of Freedom and Prosperity” led to a new development and further strengthening Japan-India ties. The first Malabar exercises began in 2007 whereby it was carried out between the navies of the U.S., Japan, and India. The strategic relations got a further boost after former PM Manmohan Singh’s visit to Tokyo for the advancement of strategic global partnership. The year of 2009 and 2011 was followed up by PM Yukio Hatoyama and PM Yoshihiko Noda respectively, who further committed to strengthen their ties with an enhanced focus on maritime security. And very recently PM Modi’s visit to Japan in 2014 witnessed the elevation of Japan-India ties to a special status namely as Special Strategic Global Partnership, which clearly shows that Japan has been given a unique position. India has a special status partnership with only Russia as the relationship has been time tested, and providing the similar status to Japan evidently indicates the importance of Japan to India in its engagement and also future prospects.

The Look East Policy was started in the year 1991 under the tenure of former PM P.V. Narasimha Rao, and is a major component of the Indian foreign policy. However, the Look East Policy as it didn’t gain much ground in the initial years. It gained some momentum during PM Singh’s tenure and even further under the current PM Modi government they renamed it as “Act East Policy.” The Act East Policy provides an opportunity for multilateral engagement which is at the forefront of both Japan and India’s policy. ASEAN has been at the centre of India’s Act East Policy from its origin and Japan too has a history of its strong economic relations with Southeast Asia, which could well be a converging point for both the countries to cooperate in. The bilateral trade between ASEAN and India has risen from 12 billion in 2001 to 72 billion in 2012 which indicates a strong growth in ties. The Act East Policy has gone on to engage with other countries apart from its traditional ASEAN nations like Australia, Mongolia, Pacific Island nations, South Korea and Japan which have become more multifaceted in nature. The engagements have gone on to include other aspects apart from economic assistance such as strategic, political, counter-terrorism, and defence collaboration. We are also able to witness a growing convergence or alignment of Act East Policy of India to make it more significant as it was previously seen only as a regional engagement.

There is also a need to focus on maritime cooperation as an important component of Act East Policy. Maritime cooperation is not only limited to defence or navy but can include other commercial activities which can be maritime in nature. The converging points of maritime cooperation between India and Japan require closer attention to the strengthening of two trilateral partnerships, namely the (1) U.S, Japan and India (2) Japan, India and Australia for a better integration of the Indo-Pacific. The confluence of the two seas can be brought about and made more dynamic through further strengthening of ties. Myanmar is in the strategic interest of both states as it acts as a bridge between South Asia and Southeast Asia. Japan is currently engaged in developing an industrial port in Dawei as well as a Special Economic Zone (SEZ) in Thilawa which could provide better linkages and connectivity for both India and Japan. The cooperation between India and Japan would be mostly non-combat oriented as it would focus on port development, connectivity and Humanitarian and Disaster Relief (HADR). Japan’s technological resources and expertise could be combined with India’s human resource and Information and Technology (IT), which can be another converging point for cooperation between both the countries. There is also an agreement on United Nations Conventions on the Law of the Sea (UNCLOS) which is to support freedom of navigation on the seas and also to protect sea lines of communications. Bangladesh is another country which is at the pivot of the Bay of Bengal, and is also in the best interests of both India and Japan, and can be another potential for maritime cooperation. India is a developing nation, and has high energy demand whereas Japan too after the Fukushima nuclear disaster has high energy needs as well, and they are both embedding itself in hydrocarbon infrastructure through oil fields and harbours. China’s growing assertiveness is something that also brings Japan and India closer on many accounts, but both the nations are careful on not making their alliance anti-China.

And hence from the above convergences, there are potentials for maritime cooperation like clean and renewable energy as climate change and global warming is a significant threat to the world. The capacity building programs is another field, and both India and Japan have already been engaged with individual nations in the region. The issue of connectivity and port building is another very crucial area, and Japan is already involved with port developments in Myanmar and Bangladesh. Japan’s “Bay of Bengal Industrial Growth Belt” initiative (BIG-B plan) in Bangladesh includes the development of a deep sea port at Matarbari, which can reduce distance, improve efficiency and boost connectivity. There can also be a strategic economic cooperation between Japan and India with regards to rare earth elements where there is an agreement between the Department of Atomic Energy of India and Ministry of External Trade and Industry (METI).  Deep sea mining is another field where Japan already has some expertise, and it has been considered by the Indian government as the future of scientific research but it has proven very costly which can be possible with a collaboration with Japan along with another third country.

There also comes challenges at the time of cooperation between the two nations and non-traditional security threats like human trafficking, terrorism, and immigration would also prove to be a major problem. The political support at times for democracy can also be another major issue as the region has seen the breakdown of democracy and its institutions. Japan is very much concerned about India’s relations with Pakistan as it prefers a stable South Asian region for investments. The provocation of China is to be considered in all aspects and not make Japan and India collaboration everything about China. China is important to Japan as well as to India economically and at the same time has territorial problems, but the important thing would be to seek a balanced path. The red tapism of Indian bureaucracy makes businesses difficult for foreign investors; however, this element would take time to go completely and poses a big challenge for cooperation. Japan is a distant country from India and cultural differences have been cited as some of the chief problems for Japan-India cooperation.

Therefore, having mentioned the prospects and challenges, the way forward for cooperation would be for India to prioritize multilateral or minilateral engagements as opposed to its traditional bilateral engagements. India’s ability to leverage its expanding ties with the U.S. is also in the best interests of Japan, as the U.S. – Japan alliance is the cornerstone of Japan’s security. The necessary resources and expertise should be utilized to develop alternate economic corridors. Both India and Japan can focus on cooperation in the domains of Peace Keeping Operations and HADR, which are their respective spheres of expertise. Hence all of these factors combined can lead to better connectivity and integration in the region and embolden the goals of the Act East Policy.

The author works as a Research Associate at the National Maritime Foundation, New Delhi. Views expressed are personal.