The following article is based on a speech given by Prakash Panneerselvam at the Young Scholars’ Forum on August 19, 2016. 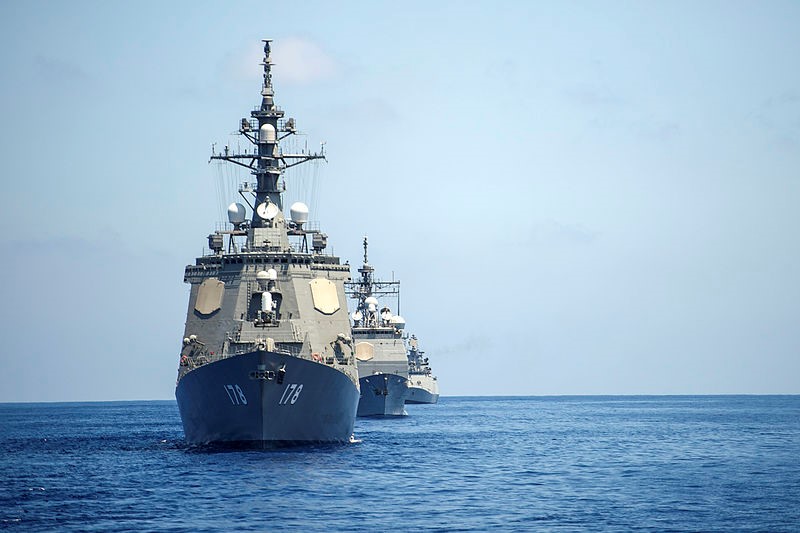 Ships of the Indian, Japanese and the U.S. Navies sail together during Exercise Malabar 2014

In the sixty years of bilateral relationship, neither Japan nor India had ever been this close in the areas of economics, politics and security. Both Japan and India are maritime countries which are highly dependent upon overseas resources and trade for sustainable economies. Regarding security challenges, the national security of both countries are also closely connected with maritime commons. Therefore, in the post-Cold War period, a bilateral agreement between both countries was arranged to enhance regional and maritime security in the Indo-Pacific region.

India-Japan maritime security cooperation has begun with Coast Guard exercise between two countries aftermath of Alondra Rainbow incident in 1999. The incident highlighted geopolitical reach of Indian Navy and Coast Guard in Indian Ocean Region (IOR). Moreover, the formation of ad-hoc Tsunami Core Group in 2004 brought again India, Japan, the US and Australia on a common ground to help Tsunami affected region in the IOR. The joint operation was a huge diplomatic success and signifies the importance of the maritime exercise between regional and extra-regional navies. Meanwhile, the partnership between India and Japan has also continued in anti-piracy effort in the Gulf of Aden (GOA) under Share Awareness and De-Confliction (SHADE). This showcases that India and Japan have shared interest in the region and can respond effectively to natural calamity, piracy activity and other security threats endangering the Freedom of navigation in the Indo-Pacific region.

The bilateral maritime security cooperation opened up a new avenue for the both navies to conduct joint bilateral naval exercise called Japan-India Maritime Exercise (JIMEX) in 2012. Japan joining the India-US Malabar maritime exercise is a fresh start for the trilateral talks. The regional security environment is also witnessing a great change due to the rise of China as a dominant power. Many strategic affair experts view the rise of China as a challenge to the present Status Quo in the Indo-pacific region. Notably, the situation in South China Sea (SCS) and East China Sea (ECS) demands a greater cooperation to thwart Chinese assertiveness in the region. India and Japan expressed concern over the growing insecurity in the region.

The Chinese maritime assertiveness including building military base on artificial islets, declaration of Air Defence Identification Zone (ADIZ) over Senkaku Island, New fishing rules in SCS, nuclear submarine patrolling crucial Sea-lane in IOR and shadowing passing by foreign naval vessels cast a huge shadow on Chinese intentions. This year, the trilateral naval exercise between India-Japan-American naval forces in the Pacific Ocean was objected by China. The Chinese air and maritime intrusion into the waters of Senkaku islands have posed a severe security concern in Japan. The frequent intrusion by Chinese vessels has prompted an aggressive manoeuvring between Japan Maritime Self-Defence Force (JMSDF) and Chinese vessels. Japan and China have established a hotline to reduce the conflict in the region. However, the issue remains pertinent as China seeks to expand its military power in the region.

For India, the waterway is an important sea-lane for its trade and commerce. India’s nearly 55 percent trade passes through the region. Moreover, India’s economic and political relationship with ASEAN countries, Japan and South Korea is tied-up with geopolitics the region. Chinese push towards the Indian Ocean to establish politico-economic relationships with Pakistan, Sri Lanka, Myanmar and Nepal seriously undermines India’s interest in the region. The military aid to some of these countries has indeed strengthened Chinese presence in the region. Therefore, it is evident that the Chinese influence in Indo-Pacific region poses a serious challenge to “Freedom of Navigation, stability, and security of the region”. The situation also provides an opportunity for India to deepen its relationship with Japan and the US.

Alarmed by the Chinese activism in SCS and ECS, the Indian and Japanese defence ministers, in a joint statement reaffirmed the importance of respecting international law, freedom and safety of navigation and over-flight as well as unimpeded lawful commerce in international waters. Even during the inaugural of the India-Japan-US trilateral ministerial meeting at Washington in 2015, the issue of Freedom of navigation in the South China Sea has surfaced as a major course of discussion. The trilateral naval exercise between India-Japan – US navies off the Japanese coast was a tangible outcome of the trilateral talk to strengthen maritime capabilities of these three navies. India-US relationship also achieved a new mark during this period as the two nations agreed to share military facilities. The notable changes in the region have significantly impacted India’s bilateral relationship with Japan and the US.

A newspaper report cites two significant developments in Indo-Japan maritime security cooperation. First, Japanese funding for construction of new Electronic Intelligence (ELINT)/Signals Intelligence (SIGINT) stations along the Andaman and Nicobar Chains of Islands to monitor Chinese submarine. According to the newspaper report, once the project is completed this network will be integrated into the existing US-Japan “Fish Hook” project called Sound Surveillance Systems (SOSUS). Secondly, regarding the Japan-India joint initiative in building Chabahar Port in Iran, India lent out to Iran US$ 150 million for the development of Chabahar Port. Japan also seems to have an interest in the development of Chabahar Port, as Japanese Ambassador to Iran Koji Haneda led a Japanese delegation to the port city to discuss possible cooperation in infrastructure development. The two reports are not verified by the respective governments; however, strategic analysts have signalled that this will lead to active collaboration between the two countries.

In conclusion, in the past sixteen years, India-Japan has managed to strengthen the relationship and maritime security has emerged as the primary focus of bilateral talks. The issue of freedom of navigation in SCS has heightened the maritime security cooperation between India-Japan. The new emphasis on the bilateral maritime cooperation is intended to strengthen naval capabilities to deter a potential aggressor.