India’s Engagement of ASEAN: From Look East to Act East

India’s Engagement of ASEAN: From Look East to Act East 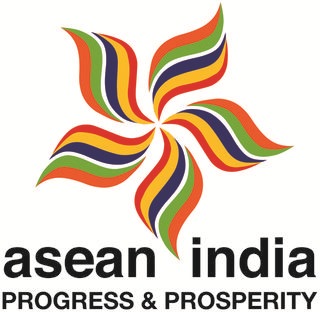 Southeast Asia is one of the most closely watched regions in the world and is known for its cultural as well as economic progress. India shares ancient cultural and economic links with the region. The Association for South East Asian Nations (ASEAN), which is a group of 10 countries, is important for India’s strategic and economic relations. India is linked to Southeast Asia through the ocean space of the Bay of Bengal and the Andaman Sea, sharing maritime boundaries with Myanmar, Thailand and Indonesia. It is also linked to Southeast Asia through a land boundary with Northeast India. Southeast Asia is crucial to the success of India’s ‘Act East Policy’.

India became a full dialogue partner of ASEAN in 1996. ASEAN region is home to around 600 million people and its GDP accounts for USD 2.5 trillion. ASEAN is India’s fourth largest trading partner. India’s trade with ASEAN countries stood at around USD 77 billion in 2014-15. India and ASEAN have targeted a bilateral trade of USD 200 billion by 2022. FDI inflows into India from ASEAN stood at USD 25 billion, while the outflows from India to ASEAN stood at USD 31 billion as of 2014. India and ASEAN signed a Free Trade Agreement (FTA) in Goods in 2009, but it was only in 2014 that an agreement on trade in services and investments was signed which completed the Free Trade Area with ASEAN. Out of India’s total trade with ASEAN, 26 percent of it comes from Singapore.

India’s Look East Policy was formulated by the Narasimha Rao government in the 1990s. The current government has decided to ‘Act East’. The term ‘Act East’ gathered momentum after former US Secretary of State Hillary Clinton, during her visit to India in 2011, said India should not just Look East but engage East and ‘Act East’.

One of the most ambitious projects to improve India’s connectivity with ASEAN countries is the India-Myanmar-Thailand Trilateral Highway Project. There is a possibility of extending the highway to Laos and Vietnam. The highway connects from Moreh in Manipur to Mae Sot in        Thailand via Mandalay in Myanmar. The Kaladan Multi-Modal Transit Transport Project connecting Lawngtlai in Mizoram to Sittwe Port in Myanmar gives India access to ports to ship cargo to Southeast Asia and enhance trade. The Mekong-India Economic Corridor (MIEC) will link India with the Mekong countries (Cambodia, Laos, Myanmar and Vietnam or CLMV).

India has also recently signed a Motor Vehicles Agreement with Bangladesh, Bhutan, and Nepal for seamless transit in the region and to improve connectivity. This new sub-regional cooperation in South Asia is expected give thrust to regional trade in South Asia by enhancing connectivity in the region. An agreement on similar lines is being worked out with Myanmar and Thailand to have seamless transit between India and ASEAN countries. South Asia’s rail link with Southeast Asia would link New Delhi with Hanoi. For the rail connectivity to materialize, it is essential for infrastructure in Northeast India to be upgraded, along with Myanmar and Thailand to ensure rail connectivity.

Myanmar is strategically important for India as it acts as a bridge between South Asia and Southeast Asia. Myanmar is the only ASEAN country that shares a land border with India. Bilateral trade between India and Myanmar stood at USD 2 billion as of 2014-15. Some of the major Indian projects include resurfacing and upgrading of the 160 km Tamu-Kalewa-Kalemyo road which would help connect Moreh to Mae Sot via Mandalay. India and Myanmar have been discussing about a bus service between Imphal and Mandalay, which would enable people to travel between the two countries easily.  Indian companies such as ONGC, GAIL have also invested in Myanmar’s energy sector to meet the energy requirements. 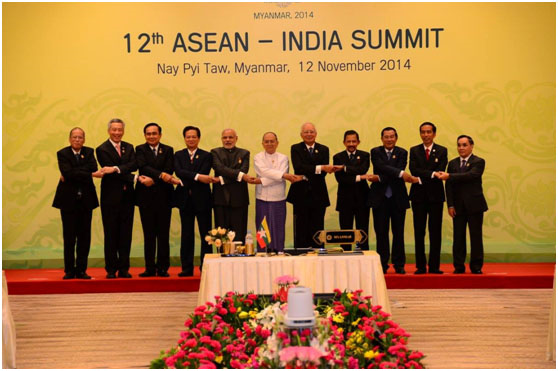 Regional Comprehensive Economic Partnership (RCEP) is a mega regional trade between ASEAN and six of its FTA partners which include India, China, Japan, South Korea, Australia and New Zealand. The aim of India-ASEAN RCEP is to enhance bilateral trade to USD 200 billion by 2022. An RCEP agreement would complement India’s existing free trade agreements with ASEAN and other countries. It will also facilitate India’s integration into sophisticated “regional production networks” and will create opportunities for Indian companies to access new markets.

The Mekong India Economic Corridor will be a network of land and sea infrastructure. It is an integral part of India-ASEAN connectivity. MIEC connects Ho Chi Minh City (Vietnam) with Dawei (Myanmar) via Bangkok (Thailand) and Phnom Penh (Cambodia), and further linking to Chennai in India. To facilitate easier shipment of goods between the MIEC, the Dawei deep-sea port is being developed. India and ASEAN are expected to sign ASEAN-India Transit Transport Agreement (AITTA) in the near future to ensure seamless transit between India and ASEAN.

India has Maritime boundaries with several ASEAN countries. India and ASEAN member-states share several common traditional and non-traditional security challenges. The two sides have identified focus areas for cooperation on transnational crime and are in the process of formulating a work plan to combat international terrorism. ASEAN and India would largely focus on non-traditional security issues such as natural disaster relief operation, search and rescue, piracy and oil spill.

While there is plenty of optimism about India-ASEAN relations in the future, the engagement with ASEAN can improve only if there is concrete development on the ground in India especially the Northeastern region of India which is key to connecting with Southeast Asia.