Home   India in the COP21 on Climate Change, Paris, November-December 2015

India in the COP21 on Climate Change, Paris, November-December 2015

The 21st Conference of the Parties to the United Nations Framework Convention on Climate Change (UNFCCC), COP21/CMP11 was recently concluded on 11th December at Paris. After two weeks-long hectic negotiations, talks and meetings, the globe’s 196 nations who are signatories to the UNFCCC, reached a consensus on tackling the crucial concern of climate change. Delegates from all the countries came out with a ‘historic’ agreement at the end of the conference, which provides a pathway to limit global temperature rise. For the first time in more than 20 years of UN’s climate negotiations, the COP21 accomplished a legally binding and universal agreement on climate – the Paris Agreement.

The Paris climate deal settled on a long-term target to limit the rise in the global temperature “to well below 20C (3.60F) above pre-industrial levels” and appealed to countries to engage in efforts to restrict the increase to 1.50C. Under the pact, one of the major factors is a promise to generate a global assessment of climate improvement by 2018; and the nations will be back to the negotiating table by 2020 for presenting climate objectives that would represent an advancement ahead of their then-existing target. Additionally, the agreement incorporates the voluntary pledges made by 188 parties (countries) to climate change action in the shape of Intended Nationally Determined Contributions (INDCs). Overall, the Accord comprises emissions-slashing pledges from individual countries and promises to help the developing nations adapt to the detrimental effects of global warming. Moreover, the negotiators agreed on measures to amend, strengthen, and scrutinize countries’ individual contributions (INDCs).

Tracing historically, the UNFCCC and the Kyoto Protocol were adopted at the Earth Summit in Rio de Janeiro, Brazil, in 1992. The Framework Convention is a universal convention of principle, which recognizes the existence of anthropogenic/human-induced climate change and the industrialized countries were allotted the chief responsibility for combating it. The Kyoto Protocol was the first instance when binding greenhouse gas emissions reduction targets were set for industrialised countries. Following these, there were series of conferences that paved the way for the COP21, such as, the Bali Action Plan (2007), Durban Platform for Enhanced Action (ADP) in 2011, Doha Conference (Qatar) in 2012, Climate Change Conferences in Warsaw, Poland, in 2013 and Lima, Peru, in 2014. 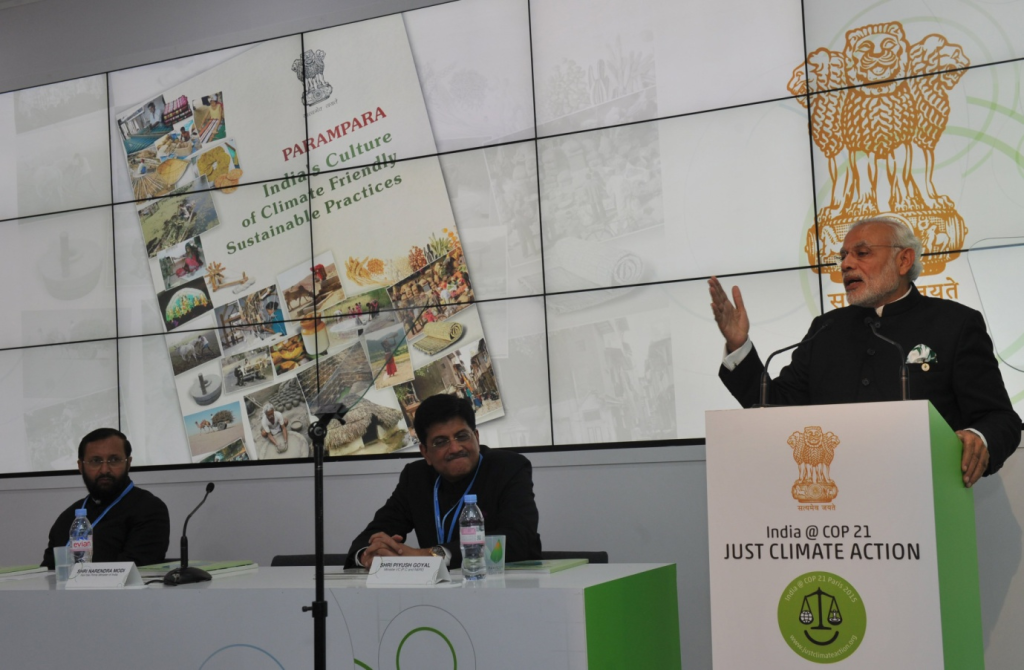 Acknowledged as one of the major leaders of the developing countries’ block, India is acclaimed to be a vital partner on the latest climate change summit in Paris. In fact, India is gradually taking a leadership role when it comes to climate change negotiations, and the developed world has already accredited this. Quite often in the past, India has been blamed for creating gridlocks in climate negotiations and was painted as a pessimist.* As a highly susceptible country, with fairly high energy efficiency, low per capita carbon emissions, and a decent track record of domestic initiatives, India has likely played a vital role in Paris, most importantly, on account of its ability to guide the host of developing nations as well as voicing their opinions.

One of the fundamental standpoints of India at the Paris climate talks was the principle of common but differentiated responsibility (CBDR) that stresses the need for equity and fairness (as highlighted by the developing countries). According to this principle, which is reflected in the agreement, there is clearly an obligation on all parties (countries) to take climate action in consideration of their respective domestic/national circumstances. According to the Indian Minister for Environment, Forests and Climate Change, Prakash Javadekar, India has emphasized on a ‘Polluter Pays Policy’ (PPP) at Paris, by which polluting countries bear the cost of the environmental damage they cause.[1]

The Indian government has, by now, taken several positive steps to tackle climate change – such as increasing the excise duty on petrol and diesel, quadrupling the coal cess from Rs.50 per ton to Rs.200 per ton, and unveiling an ambitious plan to ramp up the production of solar energy from 20 GW currently to 100 GW by 2022.[2] Additionally, solar power projects are being encouraged and accelerated in a big way and the country is moving on track to become one of the largest solar markets in the world, with the Indian Railways starting trials of solar powered trains, and even plans to come out with a solar policy for procuring 1000 MW solar power in the subsequent five years.[3] India has pledged towards a commitment to derive 40% of its electricity from renewable sources of energy (solar and wind) and other low-carbon-emitting sources by 2030. Apart from these, India has also been insistently looking to raise its nuclear power capacity – From operationalizing the Indo-U.S. nuclear agreement to striking nuclear cooperation pacts with countries like Russia, France, Canada and Australia, these seem to be gradual steps to achieve India’s target of 14,600 MW nuclear capacity on line by 2020. Additionally, if India manages to accede to the Nuclear Suppliers Group, it would raise the bar for the country’s nuclear power capacity even higher.[4]

Adding to the above mentioned factors which are portrayed in India’s INDC, it also contains provisions for commitment to reduce the country’s emissions intensity per unit GDP by 33 to 35% below the 2005 level by 2030, and to create an additional carbon sink of 2.5 to 3 billion tonnes of carbon-dioxide through extra forest and tree cover by 2030. The plan further highlights India’s ambition of installing 175 GW of renewable power capacity by 2022. It is to be kept in mind that all these actions are being proposed while simultaneously making an effort to meet the development challenges that the country faces.

Undoubtedly India has put forward a well-balanced climate plan, besides its renewable energy goals that have the potential to generate transformational changes. Although the primary challenge remains in the implementation of all these projects, the INDC gives a clear explanation that India is committed to working towards a robust international climate agreement. Given the above significant moves, India has surely played a leading role in the recently concluded climate change negotiations in Paris. Emphasis was laid on CBDR and the historical responsibility of developed nations, as highlighted earlier. While India has not hesitated to defend its interests, it was also careful not to shade itself into a corner at the Paris talks.

Saranya Sircar is working as an intern for the East Asia Research Programme at the Indian Council for Research on International Economic Relations (ICRIER), New Delhi.