India and Bangladesh Ties: Moving Beyond the Teesta River Agreement 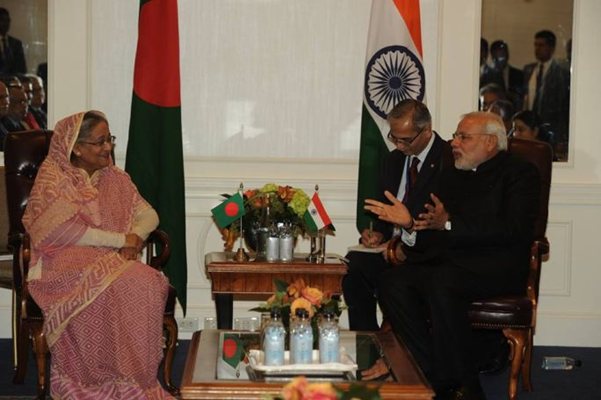 Bangladesh Prime Minister Sheikh Hasina concluded her four-day trip to India on 10th April 2017. During this visit, the two countries signed 22 deals which included deals on maritime defence, economics, etc. The ties between these two nations warmed up after Sheikh Hasina’s government helped India track down anti-Indian insurgency group in Bangladesh. Sheikh Hasina visited India after 2010. The visit was critical to both the countries, as it has become important for the Modi government, to improve ties with its regional allies to reduce China’s growing effect on them, while, for Bangladesh, it was about concluding the Teesta water deal. Hence, the core issues for both countries were – water, defence and political ties. Sheikh Hasina’s visit to India, hence, was strategically important to both India and Bangladesh.

Deals that were discussed between the two countries

Bangladesh and India signed many economic deals during these four days. The countries promised to open trade channels by increasing the number of border markets and open up routes closed since the 1965 India-Pakistan war. Sheikh Hasina even said, “The Indian business community can take full advantage of Bangladesh’s steady economic growth, high demographic dividend, competitive business cost and large consumer base. We have an Indo-Bangla investment agreement in place to protect your investment.” She urged the Indian investors to invest in “infrastructure projects, power and energy, food and agro processing, manufacturing and transport sectors” in Bangladesh.

In addition, both the leaders discussed to invest together in high technology to create more job opportunities to fight their common enemy, poverty. Prime Minister Modi said that the countries have agreed to build new opportunities together in high-technology areas for the youth of their countries. He said, “These would include working in the fields of Electronics, Information Technology, Cyber Security, Space exploration, Civil Nuclear Energy, and others areas.” Prime Minister Modi announced an extra $4.5 billion credit to help Bangladesh implement more projects and brought the “resource allocation for Bangladesh to more than $8 billion over the past six years”. They worked on improving energy security as Modi government promised “an additional 60 megawatts (MW) to the 600 MW of power already flowing from India to Bangladesh.” Hence, not just strategically but economically this trip was beneficial to both the countries. Hasina spoke about the economic zones created in Bangladesh to boost foreign direct investment and said “Mongla, Bheramara and Mirshorai” are especially for Indian investment.

However, the main deal of this visit was the five plan defence deal. It was also the first ever defence cooperation deal India signed with Bangladesh. Further, India also gave Bangladesh $500 million to buy military equipment from India. Bangladesh’s 80% of the defence supply comes China. Hence, India wanted to invest in Bangladesh’s defence as they are keen on reducing the growing influence of China on Bangladesh. However, the finance provided by India, in comparison to the capital provided by President Xi Jinping’s visit to Bangladesh last October, is very small. Furthermore, both leaders also criticised Pakistan for its stance towards terrorism. Prime Minister Modi said “there is one thought in South Asia which breeds, inspires and encourages terrorism. The thought whose priority is not humanity, but extremism and terrorism,”; while his counter partner, Hasina spoke about the “Pakistani occupation.” This showed the convergence in thoughts of India and Bangladesh which was confirmed by the Foreign Secretary S. Jaishankar, who said, “the positions taken by the Bangladeshi prime minister and the positions we have taken, there is a very similar thinking at play. Both of us, our thinking is shaped by our experience.”

Teesta river, the future of power dynamics in the region

Bangladesh, a small power, is surrounded by India, a big power, on all sides. Therefore, in order to balance the power dynamics, Bangladesh has tried to maintain good relations with other big power countries i.e. China. However, the deals made during the visit of Hasina Sheikh show that Bangladesh is now tending towards India for economic prosperity. India tried to change the power dynamics prevailing in the region by providing economic support to Bangladesh. However, it is only under the Sheikh Hasina-led Awami League government, that the ties between these two countries flourish. Therefore, in order to maintain political leverage over Bangladesh, it is important for the Indian government to solve issues that affect the people of Bangladesh, i.e., Teesta-water treaty. Teesta river supports 8.5% of Bangladesh’s population and 14% crop production. In addition, 54 rivers out of the 230 rivers that flow into the Bay of Bengal through Bangladesh, pass through India.

Bangladesh believes they will receive 48% of the water, but they only receive the amount of water originally agreed earlier. Mamata Banerjee, chief minister of West Bengal province in India, argues that if water is released, then it will affect already deprived West Bengal districts, i.e., Jalpaiguri, Coochbehar and South and North Dinajpur. During the dry season, the river only has one-sixteenth of the total water required by both the countries. This is due to many reasons: National Hydro projects, evaporation and siltation. Kalyan Rudra, a hydrologist, wrote that the siltation has been a major problem, with projected capacities decreasing at alarming rates.” During the monsoon season, both the countries release more water as the hydro-projects create more floods during the monsoon season. This leads to minimum water conserved for the dry season. If the number of hydro-projects is reduced on the river, it will help provide water to both the countries. As both the countries need water for sustaining their agriculture, it becomes important for the governments to cooperate. Some scholars believe that water will be provided by interlinking Manas and Sankosh river into the Teesta river by canals. This would help to provide adequate water to Bangladesh.

The trip was not as effective as it has been claimed to be by the two leaders, Modi termed it as “the start of a new golden era”, and Hasina called it as a “transformation” in the relationship. However, this visit did not transform their relationship to a great extent. The Teesta-water sharing agreement, a key agreement for Bangladesh did not reach a conclusion. However, Prime Minister Modi promised “an early solution” for the issue. In addition, it would not be easy for India to reduce the influence of China on Bangladesh because the amount of investment China is making in Bangladesh is more than that of India. Furthermore, this trip was highly criticised in Bangladesh by the opponent party leaders.

In order to gain its friendly neighbour image, the Indian government needs to soon find an agreement on the water sharing issues with Bangladesh. In addition, they need to provide support to the Bangladesh citizens. The frequent killing of Bangladeshi nationals by the Indian forces needs to stop in order for the Indian government to gain Bangladesh’s support. Agreements like Land Boundary Agreement need to come in place which could help gain the support of the Bangladesh citizens. Another very effective agreement was the Coastal Shipping Agreement which helped to improve trade between two countries. Bangladeshi citizens will feel more involved with their neighbours if Bangladeshi companies and TV channels can access the market. Furthermore, the main two reasons for the visit were not fulfilled completely, but it is surely a step towards better relationships with our neighbours.

Ishita Gupta is a student of Economics and International Relations at Ashoka University. Views expressed here are personal.