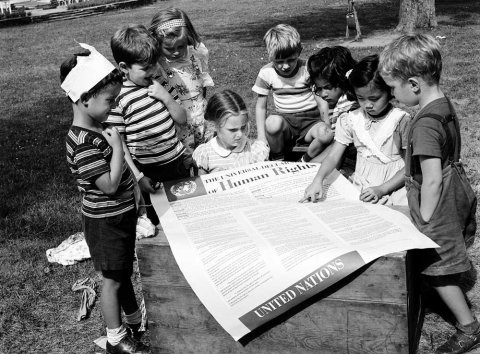 In 1950, on the second anniversary of the adoption of the Universal Declaration of Human Rights, students at the UN International Nursery School in New York viewed a poster of the historic document. UN Photo, Source: http://www.un.org/en/sections/universal-declaration/history-document/index.html

The deadliest conflict in human history, World War II, lasted from 1939 to 1945 ending in the complete defeat of the Axis powers at the hands of the Allied Powers. At its height, the major participants in the war had thrown all their capabilities at hand – economic, industrial, scientific and human – behind the war effort; erasing all distinction between civilian and military resources. With unprecedented devastation and the loss of human life estimated to be three-quarters of a billion, the war was also one of the most glaring examples of violation of all forms of human rights; most importantly, the right to life.

In the aftermath of the war, the Allied Powers, in an apparent effort to initiate peace maintenance measures formed the United Nations (‘UN’) which officially came into existence on October 24, 1945. The Universal Declaration of Human Rights (‘UDHR’) was adopted by the UN General Assembly in 1948 and in so doing, the right of all people to be treated equally and with dignity was enshrined under international law. The Preamble to the UDHR states that the proclamation of the declaration was to secure the ‘universal’ and ‘effective’ recognition of the rights contained therein. Here, the idea of universality is key. The fundamental premise being that human rights apply equally to all nations without exception.[2] This concept of ‘universality’ is what has not found favour with many countries of the Asia-Pacific, which have vociferously resisted the human rights and democracy discourse emanating from the ‘West’.

Human rights and ‘Asian values’ in their most fundamental sense are manifestations of the relationship of the individual with the State and the problem that lies at the heart of this debate is the effective implementation of universal human rights. The idea of ‘Asian values’ attempts to find legitimacy through the concept of ‘cultural relativism’. ‘Cultural relativism’ is premised on the idea that all cultures are equally valid and that standards of evaluation are internal to traditions. It sees that values emerge in the context of particular social, cultural, economic and political conditions and therefore vary enormously between different communities.[3] However, the language of cultural relativism has often been exploited by various state leaders and high officials to justify and rationalise repressive policies, despite such policies having no philosophical or cultural justification.

The ‘Asian values’ ideology emanates from the proposition that there are values and patterns of behaviour that are common to Asian countries and peoples. Diane K. Mauzy writes, “when Asian countries speak of Asian values, they are referring to such shared beliefs as respect for authority, belief in strong family ties, belief in frugality, hard work, saving and sacrifice, strong opposition to state welfare, and a belief in punishment as a deterrent to and retribution for crimes.”[4] One of the arguments forwarded in support of ‘Asian Values’ is that authoritarian arrangements are allegedly effective in promoting economic success. While the faster rates of economic growth in relatively authoritarian states such as South Korea, Singapore, post-reform China as compared to the economic growth in many less authoritarian states including India, Costa Rica and Jamaica is reflective of this idea, it is by no means absolute proof of the same. Further, this reasoning also nose-dived when the 1997 financial crisis hit Asia. In fact Professor Han Sung Joo citing one school of thought in his article ‘Asian values: An asset or a liability’, proposed that the same ‘Asian values’ which created “economic advantage during the early industrialisation and pre-globalisation stage of development, have actually impeded these Asian countries in adjusting to the new age of interdependence and globalisation.”  Another argument in favour of the opposition to the ‘Western’ notion of human rights is that it stemmed from a sense of wariness of interventionist tactics being employed by the West via the human rights discourse in order to maintain hegemony and retard Asian growth.

Within the construct of positing ‘Asian values’ against the ‘Western’ notion of human rights, values such as privileging the community over the individual, respect for authority and filial duty are dichotomised against western values such as individualism and materialism. By extension this implies that Asian societies have their own way of doing things which completely invalidates the play of western ideas within Asian societies. Echoing Amartya Sen’s views, it can be said that what essentially needs to be answered in this entire discussion is whether Asian countries share the common feature of being skeptical of freedom and liberty, while emphasising order and discipline – is there a shared mistrust of the claims of liberal rights? Further, in direct opposition to the common claim that the ideas of human rights and democracy represent a form of western ‘cultural imperialism’, it is argued that only democratic procedures and the protection of fundamental human rights can ensure that the development strategies of Asian states conform to the values of Asian people.[5]

The effects of this alleged dichotomy were also visible in the formation of two intergovernmental bodies in the post war period – ASEAN in the East and the European Union (EU) in the West. The impetus behind the formation of both was on different lines. Though the objective of both the bodies was to provide security for its member states, Western Europe sought to do this by increasing interdependence through regional integration while South-east Asia chose to do this by establishing the norm of non-interference. The lack of a shared ambition for regional integration within the South-east Asian member states can be deduced from the fact that the first ever summit of ASEAN leaders did not take place until 1976, over eight years after ASEAN’s formation, and there were only four summits in the first twenty-five years of ASEAN’s existence.[6]

The Heads of State/Government of ASEAN member states adopted the ASEAN Human Rights Declaration on November 18, 2012 in Cambodia, through which they reaffirmed their commitment to the UDHR, the UN Charter and the Vienna Declaration and Programme of Action. This declaration which was signed in the hope that it will help establish a framework for human rights cooperation in the region and contribute to the ASEAN community building process, attributes four characteristics to all human rights – universality, indivisibility, interdependence and interrelatedness. Given the diversity that exists in South-east Asia, the Declaration also says that the realisation of these human rights must be considered in the regional and national context bearing in mind different political, economic, legal, social, cultural, historical and religious backgrounds.

It is agreed that cultural diversity must be given its due regard, however excessive reliance on the language of cultural relativism has the potential to construct fabricated dichotomies and posit western and ‘Asian values’ as irreconcilable opposites. It is suggested that the debate about supposed Asian and western values rests on false premises about the nature of values, and that a ‘cosmopolitan’ approach, that recognises both the genuine cultural diversity and the interdependence of peoples in the contemporary world, is more likely to promote the legitimate aims of economic, social and political development.[7]

What the Asia Pacific region is looking to achieve today, is regional integration; and it is widely believed that cultural diversity and the lack of a shared regional identity make it difficult for this to take place.[8] The dichotomy aside, any moves attempting to achieve this, should be made under close scrutiny to ensure that they are in harmony with the rules and regulations of international law, particularly basic human rights norms.

As has been rightly pointed out by Dr. Sen – the view that the basic ideas underlying freedom and rights in a tolerant society are “Western” notions, and somehow alien to Asia, is hard to make any sense of, even though that view has been championed by both Asian authoritarians and western chauvinists.[9] If at all the debate between the two concepts must go on, the real issue to be pondered is not whether non-freedom perspectives are present in Asian traditions, but whether the freedom oriented perspectives are absent there.

[9] See SEN, A. (1997) Human Rights and Asian Values. paper presented at the Sixteenth Morgenthau Memorial Lecture on ethics and Foreign Policy sponsored by the Carnegie Council on Ethics and International Affairs. p.17