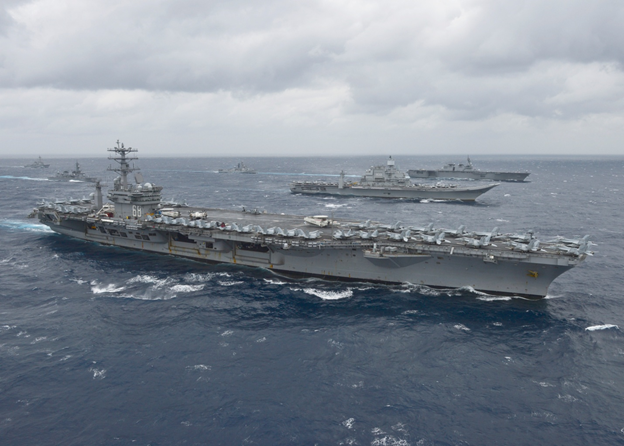 The aircraft carrier USS Nimitz (CVN 68) leads a formation of ships from the Indian Navy, Japan Maritime Self-Defense Force (JMSDF) and the U.S. Navy July 17, 2017, in the Bay of Bengal as part of Exercise Malabar 2017.

What is the Malabar Exercise?

The Malabar Exercise is a trilateral military exercise between the navies of India, Japan and the United States (US) as permanent partners. Every year it is held alternately in the Indian and the western Pacific Oceans. These exercises commenced in 1992 with the US and Indian navies in the Indian Ocean, and have traditionally been a bilateral exercise between India and the US. In the 1990s the exercises were conducted thrice. It was discontinued after India conducted nuclear tests (Pokharan-II) in 1998 and was again resumed in 2001. Recently these exercises were permanently expanded into a trilateral arrangement with the inclusion of Japan in 2015.[i]

What is the significance of the Malabar Exercise?

The primary aim of the Malabar Exercise is to increase/improve the interoperability between the Indian, the US and the Japanese navies, and to restate the strong relationship between them in many domains, including maritime security operations. According to the Indian Navy, the high seas are highly vulnerable to terrorism, gun-running, piracy and drug trafficking. Therefore, better interoperability (through the military drills) would help the participating navies respond to such threats more effectively.

Given the present geopolitical scenario where China’s military strength has witnessed a steady increase, in conjunction with its growing presence in the Indian Ocean, these military drills assume immense importance.

Where was the current series of Malabar Exercise being organised? What is the significance of the location?

The Bay of Bengal is increasingly becoming a vital sector of economic and strategic juncture in the Indo-Pacific region. It may turn out to be a zone of strategic competition between India and China. Some of the primary factors that have been transforming the strategic and economic dynamics of the Bay of Bengal are – the rising southward orientation by China; opening up of Myanmar; rich presence of natural resources (particularly oil and natural gas); and the growing regional connectivity networks in and around the littorals of the Bay. Apart from these, non-traditional security hazards such as environmental concerns, piracy and terrorism are also surfacing as anxieties in the Bay of Bengal.

The US Navy was represented by the ships from the Nimitz Carrier Strike Group and other units from the US 7th Fleet. The Nimitz class can displace over 100,000 tonnes, carry a crew of over 5000, and can launch fighter aircrafts at intervals of 20 seconds. The US Naval forces included the Nimitz-class aircraft carrier USS Nimitz (CVN 68) with its embarked Carrier Air Wing 11, Ticonderoga-class guided-missile cruiser USS Princeton (CG 59), Arleigh Burke-class guided-missile destroyers USS Howard (DDG 83), USS Shoup (DDG 86), and USS Kidd (DDG 100), along with integral helicopters, a Los Angeles-class fast-attack submarine and one Long Range Maritime Patrol Poseidon Aircraft P8A.

This recent exercise was the first to involve a carrier from the navies of each of the three participatory countries. Besides, there was a joint training between the naval special forces of the Indian and the US Navies at INS Karna, Visakhapatnam.

How is this exercise being viewed amongst participating countries?

The US standpoint assesses the Malabar Exercise to be playing a vital role to ensure the protection of shared interests of players operating in the Indo-Pacific region. The US has appreciated India’s improving defence capabilities and commitment to a common set of principles for the region that values sovereignty and international law. The recent joint statement issued after the summit meeting between the US President Donald Trump and Indian Prime Minister Narendra Modi noted growing strategic convergence in the Indo-Pacific, enhanced maritime cooperation and the significance of the Malabar exercise.

For Japan, the Malabar drills signalled the growing importance of ties between the two nations (India and Japan), plus the personal importance that Prime Minister Modi has attached to India’s strategic bonds with Japan. The Japanese Diet has eased its laws pertaining to the defence forces vis-a-vis foreign military relations.

How has China responded to the Malabar Exercise?

China has been uncomfortable with the Malabar Exercise and tends to view it as a containment grouping to check its influence in the Indo-Pacific region. For instance, in June 2007 China had issued a demarche to each of the participants in the first-ever official-level security consultation between the US, India, Japan and Australia requesting for the details/purposes of the meeting. Since 2015, Chinese Shang-class and Song-class submarines have been deployed in the Indian Ocean.

Beijing’s presence in the Indian Ocean region has gone up in the recent past. In the preceding two months prior to MALABAR-17, the Indian Navy has spotted more than a dozen Chinese warships, including submarines, destroyers, and intelligence-gathering vessels. Reportedly, a Chinese intelligence gathering ship, Haiwingxing, had sailed into the ocean in June-end. The Yuan-class diesel-electric submarine, the seventh underwater boat deployed by China in the Indian Ocean region since December 2013, has been presently reported to be in the region.

Nevertheless, China has expressed hope that the Malabar naval drill is not aimed at ‘any third party’. In the words of the Chinese Foreign Ministry spokesperson Geng Shuang, “We have no objection to the normal bilateral relations and cooperation among relevant countries, but we hope that this kind of relationship and cooperation will not be directed at any third party and will be conducive to the regional peace and stability”.

Are there suggestions to expand the Malabar Exercise by ensuring participation of other countries? What is India’s position?

In the 2007 edition of the Malabar that was held off Okinawa, the bilateral exercise had witnessed an expansion for the first time since its inception, with the participation of Japan, Australia and Singapore. But it resumed the bilateral character again from the following year.

Australia has been eager to join the Malabar on a permanent footing, but this has so far not materialised owing to India’s disinclination. Canberra had requested for an observer status at this year’s drills, which New Delhi is reluctant to embrace. As per the official Indian stance is concerned, there is no objection to bilaterally engage with Australia; however, there is less confidence of Australia’s “strategic clarity” vis-a-vis China, particularly since China has made economic inroads/advances into Australia.[ii]

Understandably, the intensity of cooperation between the US, India and Japan has increased with time. This is the third year since Japan joined the US and India as a permanent member. The US government’s defence department has stated that over the years the Malabar exercise has grown in scope and complexity to deal with various shared threats to maritime security in the Indo-Asia Pacific.

This time, with the involvement of three aircraft carriers from the participating countries, MALABAR-17 witnessed a qualitative transformation. Additionally, the magnitude of the fleet that was deployed was also noteworthy. It has been considered as one of the biggest joint naval exercises in the region. The participatory countries have tried to field their largest warships for the drills. It appears that their defence forces are interacting with greater enthusiasm. Therefore, the 2017 Malabar Exercise saw a synchronising power projection of the major players in the Indo-Pacific.

Saranya Sircar works as a Consultant for the East Asia Research Programme at the Indian Council for Research on International Economic Relations (ICRIER), New Delhi.

[ii] In 2007 Australia was the first to opt out of the US-India-Japan-Australia “quadrilateral” following China’s demarches to all the four participants.