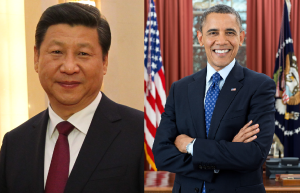 In the past two weeks, much of the American political conversation has centered on Pope Francis’ sensational visit, John Boehner’s surprise resignation, and Russia’s initiation of airstrikes in Syria. While all of these events were historic, they overshadowed an equally important foreign visit – that of Xi Jinping, the President of China. While turmoil in Syria, disarray in the U.S. Congress, and changes in the Catholic Church are crucial to the state of international affairs, the relationship between the U.S. and China remains the most crucial factor shaping developments on the broader global stage. Great power relations, and the state of the international system, hinge on relations between the world’s leading power and its most prominent rising power. Thus, American and Chinese strategists need to take advantage of Xi’s visit to review the complex state of relations between the two nations.

Xi’s visit comes at a crucial time. Domestic factors are pushing both nations towards aggressive rhetoric at home, but the international moment demands constructive cooperation from the U.S. and China. Achieving this goal will not be easy. The U.S. Presidential primary season is in full swing, and with it has come a raft of candidates posturing themselves to claim the mantle of “tough on China”. The recent downturn in the Chinese stock market, coupled with aggressive military moves by Xi’s regime and China’s suspected culpability in cyberattacks on American government and commercial entities have made China an enticing target for Presidential hopefuls. The Republican Party is currently in the throes of an anti-foreign moment, with Donald Trump’s promises to build a border wall with Mexico drawing him support in the polls, and one poll even finding 40% of Americans in favor of building a wall on the border with non-threatening Canada to the north. Republican candidates have tried to capitalize on this sentiment with anti-China rhetoric. Current frontrunner Donald Trump and Senate Foreign Relations Committee member Marco Rubio both proposing that Mr. Obama cancel the State Dinner. Such statements are likely to continue as candidates hope to use them to prove their bona fides as foreign policy hawks. Mr. Obama does not need to run for another term, but will likely still feel pressure to appear tough on China to protect his former Secretary of State and his party’s frontrunner, Hillary Clinton, from attacks tying the Obama Administration to China policies seen as conciliatory.

In China, Xi Jinping faces his own set of domestic pressures driving him towards hawkish posturing. Xi moved quickly to consolidate his rule upon taking power, but turmoil in Chinese stock markets has called the security of his leadership into question in recent weeks. Although the Chinese government has taken extensive measures to stabilize the markets, Mr. Jinping still finds himself having to constantly reassure the world that the situation is under control, as he did in Seattle on the first day of his visit to the U.S. In addition, analysts have speculated that Xi may be engaged in an internal power struggle with Jiang Zemin, many of whose followers he has deposed in his anti-corruption campaign. Hawkish posturing is one avenue that Mr. Jinping may consider to bolster his suddenly vulnerable position.  He already arranged for China’s first military parade in 66 years, held on Sept. 3, as an ostentatious display of Chinese military might and, by extension, his own power. If his domestic situation grows more precarious, Mr. Jinping may be tempted to use aggressive rhetoric and actions against foreign powers to shore up his position, appealing to his base just as the Republican candidates have appealed to theirs.

Nonetheless, the world presents plenty of far-reaching challenges that can only be tackled with the cooperation of the world’s two leading powers. Climate change remains a pressing issue that will take global cooperation to solve. Flashpoints are emerging in Syria as well as the East and South China Seas that have the potential to spur conflict between major powers. And cyber warfare techniques are developing rapidly, without an internationally agreed-upon set of rules to manage potentially devastating escalation. Other powers will take their cues from the behavior of the U.S. and China, so the two countries need to show strong leadership in tackling these issues together while managing the tensions that are inevitable between an established and a rising power. Mr. Obama and Mr. Jinping needed to put aside domestic pressures and show tangible progress during Mr. Xi’s visit.

So how did they do? On climate change, there was substantive progress. The biggest step was China’s announcement that it would implement a cap-and-trade system beginning in 2017 to reduce emissions in major sections of their economy. They also agreed to common standards on vehicle and building efficiency. Beyond these policy agreements, the two powers affirmed their commitment to a “shared vision” for the upcoming climate agreement to be concluded in Paris in December. This agreement was less concrete than the policy changes – the countries agreed to the common goal of a “low-carbon transformation of the global economy this century.”[i]  While this sounds like a great goal, the fact sheet provided by the White House was light on details of how the two countries plan to get there. On differentiation between developing and developed economies, likely to be one of the most formidable obstacles to a meaningful agreement in Paris, the fact sheet is vague, referring only to “new progress”. Nonetheless, the public statement of agreement has value in itself, and is a positive sign in the run-up to the Paris negotiations.

The two powers also came to an agreement on cyber warfare, but it contains far fewer specifics than the climate change agreement. Most notably, the U.S. and China agreed that “neither country’s government will conduct or knowingly support cyber-enabled theft of intellectual property.”[ii] This agreement was designed to address concerns over suspected Chinese cyberattacks on American companies that have drawn recent headlines and given U.S. politicians material with which to attack China.  Although this commitment is admirable, the agreement lacks a concrete enforcement mechanism.  Moreover, there are many ways that China could conceivably circumvent the language of the agreement, for example by conducting cyberattacks via elements of the Chinese military that the Chinese leadership does not consider part of the government proper. In a gloomy summation of the state of affairs, U.S. Director of National Intelligence James Clapper simply responded “no” when asked if he thought the agreement would stop Chinese cyberattacks.[iii] While some agreement is better than none at all, further enforcements will be needed in order to pave an effective way forward on cybersecurity.

The White House Fact Sheet on Xi’s visit was also notable for its glaring omissions. It made no mention of the East or South China Seas, areas where the U.S. has serious concerns about China’s aggressive moves to claim territory. Nor did it mention Syria, where the five-year-old civil war poses mounting and high-stakes challenges as Russia enters the conflict and the outflow of refugees tests stability in Europe. Chinese and American interests in a stable Syria free of Islamic extremism align, but for now it seems that China is unwilling or unable to enter the Syrian situation, preferring to stay out of what has so far been an intractable problem. The Fact Sheet did mention Afghanistan, another area where both countries’ interest in a stable end-state align, but it merely “noted mutual interests” in Afghanistan without announcing any meaningful steps forward.

No one expected Xi’s visit to solve all the world’s problems, and some progress was made. In the area of climate change especially, the two countries were able to announce major policy progress. This achievement should not be discounted – climate change is a megatrend that could threaten millions of lives if left unaddressed. On cybersecurity, the U.S. and China took steps towards tackling the issue, but will need to follow up with meaningful enforcement mechanisms if the agreement is to change the status quo. China’s moves in the East and South China Seas run contrary to the interests of U.S. allies, and have the potential to spawn conflict between the U.S. and China. The lack of a statement on these issues represents a missed opportunity to mitigate the potential for conflict. In addition, while no one expects perfect concert between the two nations, the lack of any statement on Syria is a disappointing omission regarding the most dangerous conflict in the world today. The leaders of the U.S. and China will need to build on the partial success achieved by Xi’s visit to construct a durable relationship that can bear domestic trends towards hawkish behavior and still tackle the world’s most pressing challenges. 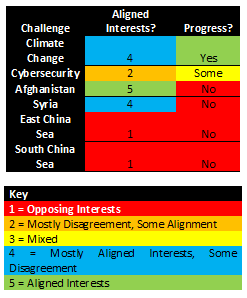